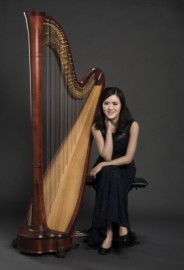 When contacting this member, please state that you are viewing their Entertainers Worldwide profile.
Request a Quote
Share this Page:
Profile Views: 673
Report this profile

Praised by her musicality and technique, Cleveland based harpist Natalie Man was a winner of the CIM’s Annual Darius Milhaud Performance Prize and the Hong Kong Inter-School International Performance Challenge. She was also the grand finalist of the American Harp Society Anne Adams Award National Competition where she receipted the Maxwell and Calkins Prize. While studying at the Cleveland Institute of Music, she was a two times recipient of the Alice Chalifoux Prize and the Jocelyn Chang and Michael Leese Award in Harp. As a soloist, she performed in the World Harp Congress and the Hong Kon ... g Harp Festival. She was also invited to give a recital in the Harpy Summer Academy. She was featured live on Click2Houston representing the Texas Music Festival.
As an orchestral musician, she performed with the Guiyang Symphony Orchestra, the Shenzhen Symphony Orchestra, the CityMusic Cleveland, the Cleveland Orchestra Youth Orchestra, the SAR Philharmonic Orchestra and multiple university orchestras in Hong Kong and the United States. Other summer festival performances include the National Orchestra Institute and the Academie International de Courchevel in France. In 2017, she was invited to give an Asia premiere on the famous composer Paul Patterson’s Mosquitoes with her ensemble the Victoria Quartet at the 13th World Harp Congress.
A passionate music educator, she owned a private studio in Hong Kong before moving to Cleveland. In 2017, she was invited to be one of the teaching assistance for the most leading harp summer camp in Asia, the Harpy Summer Academy held by the Hong Kong Harp Centre.
Ms. Man holds a Bachelor of Music degree and a Diploma in Performing Arts from The Hong Kong Academy for Performing Arts where she studied with Dan Yu and Ann Huang, and a Master of Music degree as well as an Artist Diploma from the Cleveland Institute of Music where she is a student of internationally renowned artist Yolanda Kondonassis. Besides being a professional harpist, she also plays the piano and the organ. She got merit on grade 8 ABRSM exam for piano and distinction on grade 8 ABRSM exam for organ. A native Hong Kong, Ms. Man began studying the harp at age of 12.