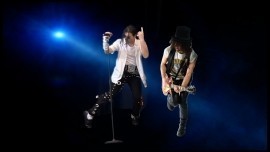 (no reviews)5.0
Country: United Kingdom
Based In: Lutton, Midlands
Performs: Worldwide
From: £1200

Bringing to you the magic of the “King of Pop” with show stopping, live, high tenor vocals, slick choreography and energy, by re-creating some of his most memorable performances, from the 70’s with The Jacksons, through to the mega stardom hits of the 80’s and 90’s.
: +44 771426XXXX Click here to reveal
full number