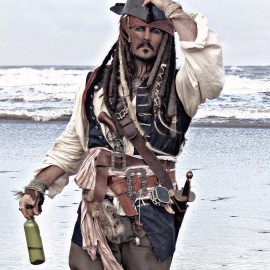 (no reviews)5.0
Country: United Kingdom
Based In: Whitby, North of England
Performs: Worldwide
From: £150

I am one of the UK's best captain Jack Sparrow lookalikes according to many clients all over the UK and Europe also appeared on p&o cruise ships.... corporate, mix and mingle and photographs.... I also have a multitude of pirates who can appear with me..
Contact Me / Request a Quote
Share this Page:
Profile Views: 570
Need Help?