I'm looking for:
near:
Or click here to view a list of all locations
You Are Here: Musicians / One Man Bands / Belarus / Vitaly Voronko 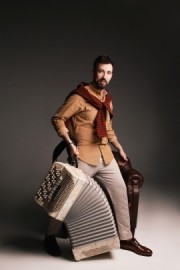 Vitaly semi-finalist of Britain's got talent, Mam Talent, The voice of Poland, The voice of Russia, Eurovision and many TV shows all over the world. He are singer, accordionist, Dj and showman.
: +37533334XXXX Click here to reveal
full number

Vitaly Voronko has a very good qualities in terms of singing in Russian and English language and also can entertain people with our original songs and covers songs too.

History
Vitaly was born on December 22, 1990 in the provincial town of Baranovichy in the Republic of Belarus. When he was 9 years old, Vitaly went to music school in the class of button accordion [10].
In 2006, he moved to the capital of Belarus, Minsk, despite his financial difficulties, his talent allowed him to travel the world performing as a classical accordionist. He became a laureate and winner of competitions in Germany, Italy, Poland, Ukraine, Russia, Lithuania[11]. The most prestigious award was the "Pacific Accordion World Cup" in Australia, Sydney, where he won first place. ... Vitaly received great recognition for his accordion skills in his home country and received a special badge personally from the President of the Republic of Belarus, Alexander Lukashenko[12].
In 2015, he graduated from the Belarusian State Academy of Music. In addition to classics, Vitaly achieved great heights in jazz where his was praised by esteemed jazz musicians Richard Galliano, Mark Gross, Adam Makovich, Leon Foster Thomas, Alvin Atkinson, Jan Tabachnik, Friedrich Lips, Pinot Rudieri, Oleg Butman[13].
Television
Vitaly was chosen as a contestant on Belarus’s highest rated program "Academy of Talents", where he went to the finals. Following this, Vitaly was awarded “Best Song of the Year” in Belarus for “Dance With Me”[14].
Vitaly then participated in the final of the selection for Eurovision 2013 with the song "I Wonder How You", gaining him international recognition. [15].
In 2014, he went to the casting of the show the "Voice of Poland", where he became a fan favorite with his performance after receiving over 1,000,000 weekly views. After that, Vitaly was invited to perform for the finale of the show as a special guest-star. Soon after, Vitaly opened for famous Polish band PIERSI in Warsaw in Tarwasz Arena[16].
In 2015, Vitaly became a fan favorite on Britain’s Got Talent receiving recognition for his charisma and humorous interaction with lead judge, Simon Cowell. Vitaly went on to the semi-finals, receiving millions of views for his superhero costume, hilarious persona, and of course his esteemed accordion skills[6]. Following this he was asked to take part in Stephen Mulhern’s “Britain’s Got More Talent”.
After meeting Olisa, the two performed on Poland’s “Mam Talent”, making it to the semi-finals.

Share this Page:
Click here to view all of our One Man Bands on Entertainers Worldwide
Browse all Entertainment Hire options!