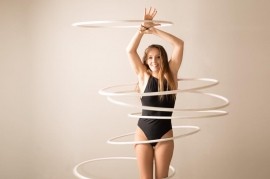 (no reviews)5.0
Country: Australia
Based In: New South Wales
Performs: Worldwide
From: $400

Deni's current hula hoop act is a 5 minute funky routine to a remix of songs from James brown, Ray Charles and Little Richard. She starts with one hoop and ends with a 6 separations.
Request a Quote
Share this Page:
Profile Views: 220
Report this profile

Deni's most recent act is a funky routine to Ray Charles, James Brown and Little Richard. Her costume is a little blue crop top with high waisted red booty shorts. Starts off with Deni facing backwards to the audience and then slowly but sharply turning around to the beat of the music. She kicks up her first hoop and the fun begins. The routine can either end with a 6 hoop separtion on her body or with 2 helpers throwing on at least 15 hoops, on to her body while she continues to spin them all.
This routine was direct by Jasmine Straga.

Deni Davidson is an Australian Circus performer, specialising in Hula Hooping and has performed extensively in both contemporary and classical circus environments.
Deni’s passion for circus began as a young child when she attended a festival, where she saw a hula hooping act and became inspired to try circus. Deni started her training in Mackay with Sensory Circus and as her skills developed, Deni sought to improve them further by leaving her parents at the age of 12 to join full time training with the Flying Fruit Fly Circus in Albury, where she trained under the watchful eye of Yo ... s Worth for 2 years.
Deni spent a further 4 years with the Flying Fruit Fly Circus, training technique and performance in Hooping, Acrobatics, Solo Trapeze, Duo Trapeze and more.
While being a part of the Flying Fruit Fly Circus she performed in many events & shows, but her biggest achievement there was getting in the show “Circus under my bed” directed by Jodie Farrugia. The show toured for 2 years. The highlight for Deni was performing in Australia’s prestigious Sydney Opera House on two occasions. The show also toured the Melbourne International Comedy Festival, Canberra Theatre Centre and internationally at the Zorlu Centre in Istanbul, Turkey.
Deni graduated with 7 other students in 2015 creating their own end of year production, “Pendulum”, which toured Albury and Woodford.
Deni competed in the Australian Circus Festival in 2017, where she delighted audiences with her quirky Hula Hooping act.
Through put 2018 Deni performed with Stardust Circus, Brophy Bros and performed corporate events around Sydney.
Deni’s dream is to travel the world as a professional circus performer and continue to challenge herself with learning new skills in technique and performance.