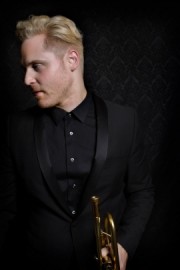 (no reviews)5.0
Country: United States
Based In: USA, California
Performs: Worldwide
From: $1200

"A top-drawer trumpeter who also sings like an angel obscured by a storm cloud...invoking the ghost of Chet Baker...dreamy...gorgeously windswept." -JazzTimes "...a post-millennial Chet Baker...further polishes a trumpet and vocals package." -The New York Times
: 917-328-XXXX Click here to reveal
full number

Acclaimed trumpeter, vocalist and songwriter Matt Von Roderick has been hailed as “Taking Jazz into the Future” by Downbeat Magazine, as “a post-millennial Chet Baker” by The New York Times, and winner of the Independent Music Awards as judged by rock icon Lou Reed. Classically trained, Matt has been a featured soloist at Carnegie Hall and Lincoln Center. Matt earned his Bachelor’s of Music from the Oberlin Conservatory, and his Master’s from New York University via the prestigious Vilar Fellowship. Matt has performed with pianist Brad Mehldau, The Saturday Night Live Band, and was ... a featured soloist on the Grammy-Nominated Album "Soul Call" with vocalist Nneena Freelon. Currently based in Los Angeles, Matt often pairs his NYC Classic Jazz roots with electronic production and visceral storytelling. The Huffington Post declares: “Matt Von Roderick Makes Jazz Dangerous Again”, while AXS describes Matt's sound as “musical greatness”.