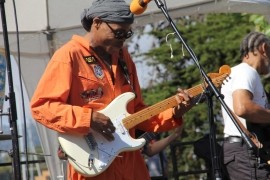 We are a 1970's influenced funk band. We have a cosmic theme going on & NASA flight suits for costumes. Formed in 1996, we have produced 4 CD's and toured thru out the US & aboard.
: 510228XXXX Click here to reveal
full number

We bring positive vibrations to the stage, We have an exciting crowd pleasing sound. Our musicianship is top notch. We play originals & cover tunes.

Medley # 1 Or 2
which includes an original song's intro, Night of the Thumpasaurus People, Jungle Boogie & Damn Right I'm Somebody.
Something for Ya
Funky People
Right Thang
Chocolate Lollipop
I Can Never Be
Some People
We Got Funk
Planet Funk
Sweet Broun Sugar

The Funkanauts originated in Oakland California by Jason Collins, Lowen Harper & Parrish James. The band started out as a Trio in 1996 & expanded to a 6 piece bands. Funkanauts played clubs and festivals in the bay area & beyond ever since. Parrish James unfortunately at band rehearsal suffered a heart attack. The band pulled thru and hired bass players to fill the spot. We have self produced all 4 of our CD's.