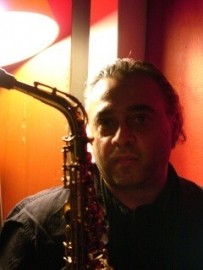 (no reviews)5.0
Country: United Kingdom
Based In: UK, North of England
Performs: Worldwide
From: Contact

I play on my Saxaphone the coolest Brazillian Bossa Nova either for relax or dancing - From a duo right up to a 6 piece band...The music of Antonio Jobim and Luiz Bonfa.. Beautiful!
: 0782647XXXX Click here to reveal
full number

I am a Jazz saxophonist and perform beautiful relaxing Bossa Nova Music either as a duo or with a 6 piece band(including a vocalist).. It can also be played upbeat should the Public want to dance.. I play the music of Brazillian legends such as Antonio Carlos Jobim and Luiz Bonfa - Also work popular songs into Bossa Nova and Samba such as The Beatles, Lionel Richie and Bet Midler to name a few..

Classic Bossa Nova - Mana De Carnival.. Blue Bossa.. Corcavado..One Note Samba..Defafinado.. Wave.. The Girl From Ipanema.. Danco Samba..How Insensitive.. Dindi.. Mas Qu Nada.. Triste.. Samba De Orpheus.. and many more
Popular Songs - Yesterday... How Deep is Your Love..Just the two of us...Wind Beneath My Wings... Hello...Let It Be.. My Girl and many more

About SAM Q
Sam Q has performed 3 times at World Famous Jazz Club Ronnie Scotts as well as a series of Jazz shows for Radio 1 Giles Peterson at the legendary Bass Clef Club including a guest appearance on behalf of 33 Records at Jazz Café. He was spotted by Scouts from Paramount Pictures and was the only direct inclusion in the filming of the remake of ‘Alfie’starring Jude Law - However, after a chance meeting with Latin Musicians Sam Q found his niece in Bossa Nova composition and performance forming ‘Sam Q’s Nightpatrol’ (The name of his band suggested to him by Smiths ... Manager –Joe Moss) and recording his ‘Samba of Love’ album which was signed to Brazilian label Grooveland Music during Liverpool Sound City Event – He played many venues in Manchester including a Pre Arena series for ‘The Printworks’ he supported Bet Midler and Simply Red to name a few – In London his show was billed ‘Exporting Bossa Nova from Manchester to Brazil’ – Paul Bradshaw of ‘Straight No Chaser’ Magazine..

Many Jazz Clubs, restaurants and Pubs throughout the UK for the past 30 years -