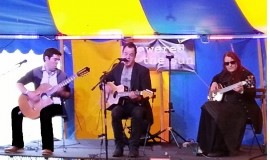 (no reviews)5.0
Country: United Kingdom
Based In: West Midlands, West Midlands
Performs: Within 50 Miles
From: £500

STRUMPIT
( Nu Gypsy Swing with a twist )
Strumpit provide solid entertainment for all occasions at a realistic price. Their musical expertise and versatility knows no bounds.
Whether you require a 20's themed Great Gatsby evening, orthodox Django Reinhardt sets, crooning standards from the 30's/40's, Gypsy Jazz arrangements of TV/Film themes , similar treatments of Pop/Rock standards, or even an evening of totally original Nu Gypsy Swing– Strumpit will deliver .
Strumpit carry their own compact and ... easy to assemble PA. They also have battery operated equipment for Busking performances 'in the field'.
The band have performed at numerous events and festivals since 2010.
The band have recorded 4 industry standard albums for promotion and sale at gigs. The band also have a number of edited industry standard humorous videos which feature film and TV clips as well as the band members themselves.
For further information or to inquire about a booking contact:
Andy Bucknall - ( 0121) 574-7178 - 07925517327

64 Lewis Road, Oldbury,
West Midlands, B68 0PW
mainmanbucknall@hotmail.com
0121) 574-7178
07925517327
...
Andy Bucknall
Music has shaped my life and my most valued friends and colleagues have been musicians or involved in the Music Industry. I still perform on a regular basis in a number of line-ups. In 2017 I performed at 3 major Jazz/Blues festivals. In the last 30 odd years I have continued on a musical journey which has included 1000's of gigs and 1000's of hours in the recording studio. I have also had 20 years experience working as an FE Tutor.
Band Chronology:
1984-87 - Stigma ( New Wave Band ) - Lead Guitar/Vocals.
1989-94 - Speaking Tongues ( Brit Pop Band ) - Lead Guitar/Vocals.
1994-97 - Session Lead Guitarist.
1997-02 - The Yampy Werewolves ( New Wave / Punk Band ) - Lead Guitar/Vocals.
2009 - - Strumpit ( Nu-Gypsy Trio ) Lead Guitar/Vocals.
2014 - Andy Bucknall Blues Trio - Guitar/vocals
Promotional & Music Industry Related Activities Chronology:
1996-01 - The Nutmeg Club ( Music, Comedy, Poetry Club ) - Founder & Compère.
1999-01 - Freedom 2 Innovate Records ( Record Label in collaboration with City College ) - Founder.
2001-02 - The Gigbeth Festival ( 3 day festival on Digbeth High Street ) Founder / Promoter.
2001-03 Birmingham Music Network ( Co-Founder )
2000-05 Advantage West Midlands ( Music Industry Rep )
Notable Musical Achievements
1994-95 – Played lead guitar on 5 EMI singles ( including a number 2 chart position and a further 4 in the top 20 )
1997 – Played Lead guitar on 2 EMI India releases.
2000 – Stage managed at the invitation of Dr Carl Chinn MBE 'The Rover Rally' ( attended by 60,000 )
2005 – Successfully lobbied on behalf of Kerrang! Radio to secure broadcasting licence; ( with support from Councillor Ian Ward (( new Birmingham City Council Leader )).
Other occupations and interests
I have worked for a substantial part of his adult life as a Further Education tutor; ( mostly part time teaching Music, English, Communications. Although I have no musical qualifications, I studied at The University of Birmingham in the 1990's gaining a BA(Hon.) in English/Theology. I also hold a teaching degree ( City & Guilds Cert in FE ) I am CRB checked and registered with the update service.
My other interests include Poetry; ( I've had a few published in anthologies ), Film/Cinema, Drama, Literature, Horticulture, local history. I have a You tube channel with band videos uploaded.
References available upon request
www.andybucknall.com
www.facebook.com/strumpit 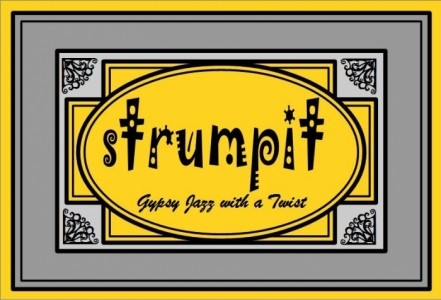 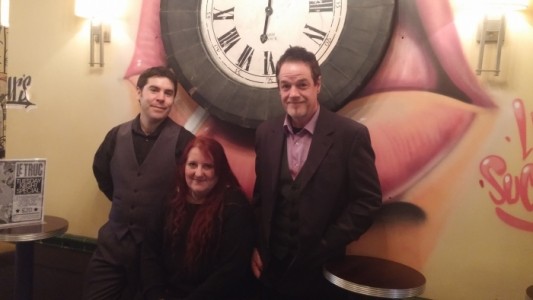 Been performing for over 20 years and performed on 5 top 20 UK recordings and other over seas recordings including EMI India. Strumpit have been quite successful on the Jazz festival circuit over the past few years and perform regularly including a monthly residency a The Trumpet, ( Bilston West Midlands ). This year's highlight so far is being booked to perform at Bude International Jazz Festival ( Aug )

Yes we carry PLI and are CRB checked ( update service )