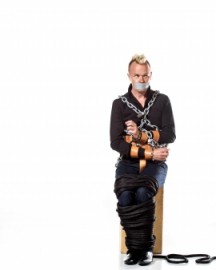 Curtis Lovell II is a Los Angeles Magician and Escape Artist, but performs worldwide for trade shows, corporate events, promotions and social events. He has appeared on Spike TV, USA Network, E! Entertainment and many other programs.
Request a Quote
Share this Page:
Profile Views: 2771
Report this profile

Curtis Lovell II is an American illusionist and escape artist. He is known for his high-profile escape performances and his events for corporations. The Washington Times interviewed him for a political piece subtitled "Houdini Factor". He was referred to in an article in weekly entertainment newspaper Citizen LA as "the premiere escape artist of our time." He has also received coverage for his stunts, including a performance with actor Tony Curtis and Larry King for award programs.
More about Curtis:
Amazing Magic and Personality:
Magically, you hear your thoughts read aloud, coins appea ... r in your friend's hand, watches stop on command and you witness Curtis escape from police handcuffs. Curtis' energy itself is magic -- drawing you into the positive, interactive experience.
Humor:
Engaging the audience, Curtis makes your guests the stars of the show -- never the punchline.
Experience:
A full-time professional entertainer, Curtis Lovell has performed for hundreds of thousands of people around the world, including Singapore, China, the Philippines, Thailand and the United States. Lovell has also made more than 10 guest appearances on national and international television during the past two years, on shows including The Simple life with Paris Hilton and Gene Simmons Family Jewels, and on networks such as USA, E! Entertainment and Spike Television.
When you hire Curtis, you entrust your guests to a professional entertainer with an outgoing personality. You will truly have a magical experience!

As a child, did you ever dream of being a firefighter or a lawyer? Or fantasize about building a spectacular spaceship to the moon? Curtis’ dream was a bit different: He longed to be a great escape artist like the legendary Harry Houdini.
After his father pulled a coin magically from his ear at age seven, Curtis has worked hard to achieve his dream, performing for millions of people around the world in Singapore, China, the Philippines, Thailand, Spain, the United States and elsewhere.
He has appeared on national and international television, including the networks USA, E! Entertain ... ment and Spike TV. His guest appearances have included the shows
MANswers, The Simple Life with Paris Hilton, Living in LA LA Land and Gene Simmons Family Jewels.
Lovell realized a personally meaningful milestone when he opened for legendary movie actor Tony Curtis during an awards show in 2009. Lovell long admired Mr. Curtis, as he grew up watching the classic film “Houdini” in which Tony Curtis portrayed the great escape artist. In 2012, Lovell was the opening act for Larry King during an awards ceremony in Hollywood California.
Also, Lovell has created headlines throughout the world as an extraordinary entertainer. CBS News, NewsAsia, Washington Times, Los Angeles Times, About.com, NBC News and many other media outlets have hailed him as "the Houdini of our time." As well as Hollywood A-listers have been keeping an eye on Lovell. 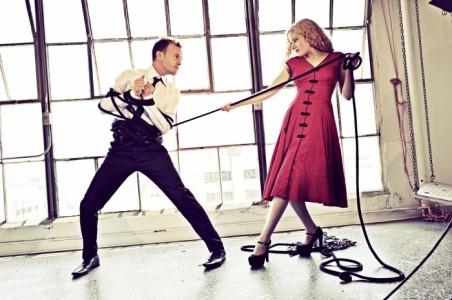 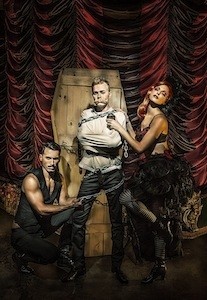 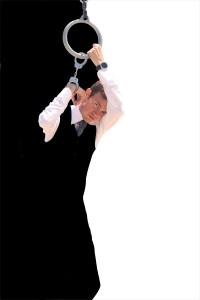 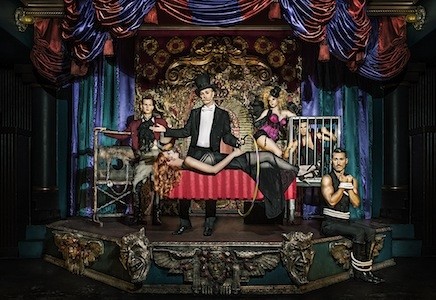 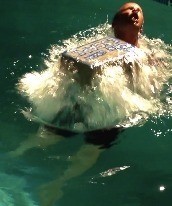 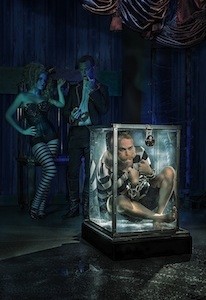 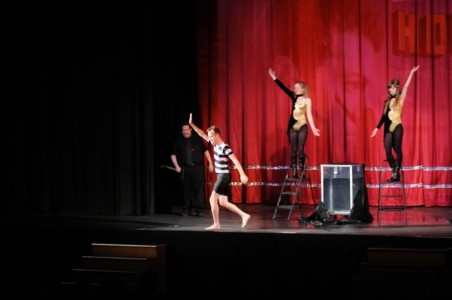 February, 2012 -Guard A Heart -Pre-Oscar fundraiser honoring Larry King - Hollywood, California
Guard A Heart presented the Guardian of Hearts award to Larry King in recognition of his contribution to saving lives through the Larry King Cardiac Foundation. The award was presented at a pre-Oscar party at the Avalon Ballroom in Hollywood on February 25, 2012. The evening included performances by a variety of entertainers. Lovell performed a Houdini-style escape as an opening act for Larry King and his guests.
October, 2009 -U.S. Military Challenge - California
Lovell was challenged by the ... United States Marines to an escape. Lovell accepted their challenge and was strapped into a regulation straitjacket by two U.S. military officers in front of thousands of spectators. It took Lovell just over 3 minutes to free himself from the straitjacket. The challenge was part of the The City of Grand Terrace (California) Halloween Haunt in Richard Rollins Park.
June, 2009 -The Magic of Tony Curtis - California
Produced by the Jules Verne Festival, 1950’s movie actor Tony Curtis was presented the “Legendarie award.” As a show opener, Lovell recreated the water escape that Tony Curtis performed in the movie Houdini. A VIP dinner at the Los Angeles Athletic Club followed, where Curtis strapped Lovell into a straitjacket in front of several hundred people for a second escape.
2008 Buried Alive - California
Lovell successfully escaped being buried alive on Halloween evening 2008 after he was shackled and locked into a coffin by a local police officer. More than 1,000 pounds of dirt were poured on the coffin. Lovell's successful escape -- in 16 minutes -- echoed an escape performend by Harry Houdini. This escape received coverage from CBS, KCAL9, and I.E Weekly.
2006 The Death Trap - Singapore
Lovell performed 18 magic escape shows for an entertainment complex in Singapore. Lovell was chained and shackled onto two large steel plates and lowered into the Singapore river by a crane. The goal was to gain publicity for the entertainment complex, and Lovell attracted the attention of 2,500 guests nightly, five major print organizations, three news networks, an international news station and radio stations.
2006 Escape From Reality - The Philippines
Lovell performed 29 shows at a shopping mall complex based on the theme of escaping fears and defying death. Lovell performed an effect similar to Houdini’s water torture cell called the Cube of Death. Lovell attracted thousands of guests nightly, sometimes more than 4,000 onlookers.
2004-2006 International comedy magic shows
China - WU IE International School
Thailand - Various school visits accompanying a Peace Corps volunteer
2007 Public Challenges
The David Blaine Challenge
Psychic John Edward Challenge
Lovell publicly challenged Blaine to a magic duel. Lovell received national press coverage including: television, print, internet, radio and on major blogs and chat rooms.
Magic Instructional Programs
2008 New Village Charter School (elective course credit)
Star Education 2007 School Retirement Employees Association
Columbus, Ohio and Los Angeles Public Libraries
DVD
"POOF! You’re a magician ~Learn magic with everyday objects" is an instructional DVD that stars Lovell teaching magic to the viewers. Distributor: Passion River Films - NYC
TELEVISION APPEARANCES
2012 Living in LA LA Land Season 2
Lovell appeared on 3 episodes, interacting with Sarit Avitan with an underwater escape and Illusions.
2006 E! ENTERTAINMENT: The Simple Life With Paris Hilton Season 4 - “Murray Family” The concept was themed around auditioning entertainers for a party that Paris was throwing. Lovell cut Paris in half and was hired back to perform for the party.
2007 USA NETWORK: Character Road Trip - 5-minute spotlight around Lovell and his Cube of Death escape.
2007 SPIKE TV: Manswers Season 1 - “How to escape from handcuffs.” Lovell explained the art of escaping from police handcuffs.
2007 RHEELZ CHANNEL: Dailies
Lovell shared his insight on the movie The Prestige.
2008 A&E: Gene Simmons Family Jewels Season 3 Season Premiere - Lovell made a cameo appearance at the veterinarian hospital with his pet Chinchilla and interacted with Gene Simmons.
2009 MYNETWORK-TV: Masters of Illusion - 4-minute guest appearance where Lovell performed a water escape.
With all of Lovell's experience, you entrust your guests to an outgoing professional entertainer with the ability of making you and your guests ESCAPE FROM REALITY.

CBS News
“Modern Day Houdini.”
Washington Times:
“Houdini Factor.”
LA Citizen Magazine:
“I’m fully convinced, he is the HOUDINI, the premiere escape artist, of our time.”
The Press-Telegram:
"How many people can say they have cut Paris Hilton in half? I believe only Curtis can."
Blade Magazine:
He is most likely to become a household name.
Larry King:
“His talents will shine with the stars, and I am sure I will be seeing him around.”
Tony Curtis:
“His water escape performance moved and wowed the audience and me -- he is truly amazing!”
...
Paris Hilton:
“I like it hot, and Curtis is the next hot thing!”
BESIDES ENTERTAINING MANY OF THE HOLLYWOOD A-LISTERS, CURTIS HAS AMAZED AUDIENCES AT SPECIAL FUNCTIONS AND CORPORATE EVENTS
C.W. Driver:
“I received nothing but outstanding compliments on Curtis’ performance.”
Ascott International:
“A wonderful time…The endless laughter and joy Curtis brought to our guests is impeccable.”
Polio Survivors Foundation:
“His performance was delightful, entertaining and certainly professional.”