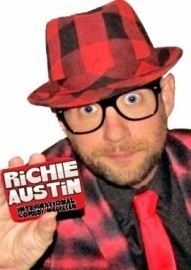 ' Richie Austin could possibly give object lesson in how to pace and present a comedy magic act. I loved both the image and the sureness. In terms of crowd approach and the aesthetic texture of the act, Richie Austin is a real winner and is truly original and different'. 'Mark Richie UK Cabaret Magazine December 2018'
Richie Austin, A Award Winning international comedy magician, entertaining people all over the world !
Richie has become one of the most highly rated entertainers, performing Comedy Magic and Illusion shows all over the world from Eastbourne to Egypt. Entertaining tens of ... thousands of people with his hilarious mixture of 'Magic and Mayhem'. Richie Performs International Comedy Illusions and Magic. His shows are a fusion of Magic, Mind Reading, Illusion and lots of Laughter all blended with toe tapping music....
'Its a Mad Magical experience' for any age young or old Richie's 'close up' style magic, card tricks and mind reading will 'amaze and amuse' everyone at your event, either at tables or walking around mixing with guests. This is ideal for weddings, parties and corporate events!
Richie Prides himself on being a Experienced and Professional Performer. Constantly updating his shows Richie keeps his performances fresh and enjoyable for everyone!
Comedy and Amazing Cabaret Magic rolled into a 45min / 1 hour shows for any audience. Mixture of mind-reading, escapology, comedy and mind bending magic. Either as a solo show or with a assistant and illusions. Over 15 years experience in UK holiday parks, theatre shows, hotels and venues world wide.
Also available for close up, walk around magic and children's shows.
Bamboozled! a Big Box illusion show, Large illusions & Richie's Very own Debbie Mcgee mixed with magic mind reading & comedy great fun ! Are you Ready to be Bamboozled ???

Based in East Sussex Richie Is a International Magician with decades of experience!
Richie was Bitten by the entertainment bug early in his life, As a born performer Richie picked up his trade very quickly learning from some of the best in the business. Over the next few years he developed his stage skills & took his love of magic to a professional level working with some of the big names in the industry !
Richie spent many years building up experience as Holiday parks as a Entertainer & entertainment manager hosting events for microsoft, uk cheer-leading association, British Darts competit ... ions and many more.
Richie Continues to perform cabaret & close up magic, from big Illusion shows to table Magic Richie has performed all over the world from Eastbourne to Egypt ! Entertaining tens of thousands of people with his unique mixture of Magic and mayhem ever year. Winner of 2019 UK Best Entertainer Award.
Richie can also be seen on stage in Panto and summer shows throughout the UK plus a occasional appearance on TV 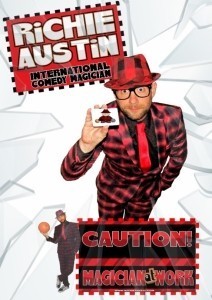 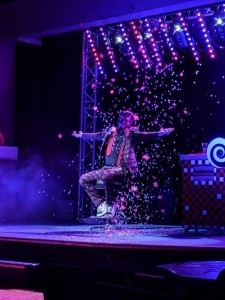 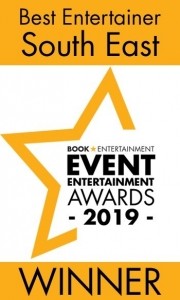 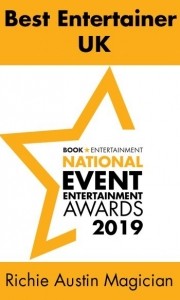 20 years in entertainment & magic from cruises to theatres and panto
www.Richieaustin.com