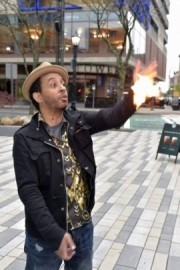 (no reviews)5.0
Country: United States
Based In: Springfield, Massachusetts
From: $400

Quality entertainment that gets everyone involved and keeps them laughing is one of the major keys to making your event dynamic and impressive. It can be frustrating to try and figure out something that will please everyone.
Request a Quote
Share this Page:
Profile Views: 122
Report this profile

Strolling entertainment like you've never seen it. Rock-Star Energy, Hilarious Antics, goofy dad jokes and off beat shenanigans. Experience this comedy mentalism show up close. Most mentalism shows take place inside a theater but Scotty's show happens surrounded! No secret assistants or stooges. Your event deserves fun and interactive entertainment that ends with a standing ovation.Scotty has audiences baffled with hilarious and amazing event entertainment that does precisely that since 1997.
Whether it's a fun and unique after-dinner mentalism or mind reading magic show for your festivals ... , fairs, fundraiser, or private party entertainment to celebrate a special occasion, Scotty has a mind-boggling and hilarious show or performance that your guests will love and praise you about long after the event is over!
It's a humorous, fast-paced and highly-interactive one-man mind reading magic and mentalism show that will keep your guests engaged and thoroughly. Scotty can tell you names of people you're thinking about, plays games with the money in their wallets, draws pictures they create in their mind, and performs crazy stunts while completely blindfolded that always has audiences freaking out and laughing the entire time! No one is ever sure whether Scotty is a magician, a real mind reader, or a comedian!

Scotty Swan first became fascinated with magic at the age of eight when he stumbled across a magic kit at a local Toys R US. He now travels around the country performing his modern day magic & mentalist show act that will defy your reality. His show is about two things, astonishing magic, and having a good time; and he doesn't skimp on either. You might recognize him by his trademark checkered sneakers or from the group of people around him freaking out at his magic and having a good time. The street mentalist is about being honest with his audience. Magic isn’t real... but Scotty will m ... ake you believe it is for the length of his show. Combining original mind blowing magic, and a heavy dose of humor is his secret to success and why it’s made him one of the best roving acts around the country. 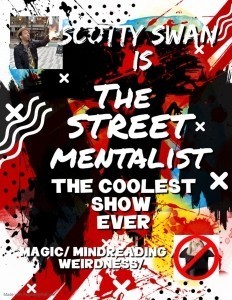