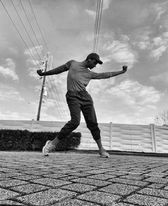 Native of Texas, Lorenzo has been seen dancing onstage in the production of "Miller Outdoor Theatre's "Ragtime" through "HITS Theatre" was a featured dancer in Ensemble Theatre's "Michael Jackson Tribute of Houston" at Jones Hall. Performed at AMTC shine event in 2014, recieving a scholarship to attend NYFA in New York City. He has studied at both the conservatories New York Film Acadmey and American Musical Dramatic Academy, Began training at Ripley Grier, Steps on Broadway and Broadway Dance Center later to assist teachers Chio, Heather Rigg and Caitlin Gray. Performed through Kat Wildishat ... the Alvin Ailey Theatre in NYC which led him to seek other performance opportunities, which pointed him to Celebrity Cruises where he was a production dancer later to become a Specialty(acrobatic) Production Dancer for three years. He has also worked for Princess Cruise Lines, choreographed music videos for the band "Secret Beach" and is a resident teacher at Meckka Dance Project and The Movement Xperience. Lorenzo currently tours as Backstage Manager for 8 National Talent Competition!