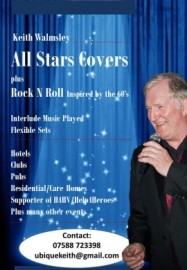 All Stars Covers Swing and Jazz to the Pop stars of the 50's and 60's onwards. Such as Jazz songs from some of the greatest singers from yester year. With more songs from the 60's Rock n Roll years to get you up dancing and great Ballads by Led Zeppelin and Phil Collins
: 0758872XXXX Click here to reveal
full number

Roadway to Vegas is a solo act with songs to suit many event requirements, If you are having an evening of jazz and swing or easy listening RTV dresses up in his dinner suit and becomes that act you want. If you need a more upbeat party theme RTV provides a 60's 70's 80's good old fashion popular and rock n roll theme to get you up dancing from Elvis to Chuck Berry.
RTV also provides an interval musical interlude. RTV is a flexible artist and loves to get interactive with the audience, get them up singing in duets or on their own and loves to get the party going.

Keith Walmsley is a Veteran from the Army (Royal Engineers). He joined up when he was 15 years old and served for 15 years. He played rugby all his life until he was 55 years old. When he had to decide what he was going to do next to fill in the huge gap a life of rugby left. He had always been an undiscovered singer and decided to join in with the local theatre and musical groups. To further his chances to get those rolls he went to singing classes for nearly three years and found that he was a Bass Baritone singer and was suited to the Rat Pack and swing sound. He added further genres to his ... singing and built a Roadway to Vegas act covering songs from Frank Sinatra to Elvis and ultimately Chuck Berry. Keith now enjoys going out to gigs on the weekend entertaining from Care/Residential homes to pubs, clubs and hotels.

I have been singing most of my life and at the age of 55 I decided to do something about it and since then I have joined up with the Blackburn Theatre group and the Musical society. I have performed in two plays and one musical in supporting roles. I have also had three years of voice coaching from Alison Kate Kendal from Rimmers music Blackburn.