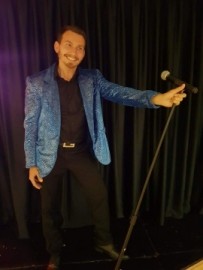 (no reviews)5.0
Country: Bulgaria
Based In: Plovdiv, Bulgaria
Performs: Worldwide
From: 1800€

I sing mostly upbeat cathy songs. A bit of 70s,80s,90s and 00s. I like to interract with the audience and to make the people sing along with me and dance as well. Its very energetic and a bit of a sassy performance. The stage costume is very important, it has to be always something that shines or has glitter on it. I dance on stage as well and my performance looks more like a entertaining show, not just singing. I have also created a show ,called " POP Icons" and its created to be at least a 3 man team show with a boy and two girls. I used to performe it in the past with two girls. It has ... choreography in almost every song and its 30 minutes long. It has 3 different Medleys - 90s medley(songs from Britney Spears, Christina Aguilera, Nsync, Backstreet Boys and Spice Girls), Diva Medley ( songs from Abba, Gloria Gaynor, Four Seasons, Kylie Minpgue, Dana International) and Girl Power Medley (Songs from Madonna, Whitney Houston, En Vogue, Patti La Belle and Jessie J).

I am from Bulgaria, I come from family of musicians. My father is a jazz guitar player and my mother used to sing . I studied English in school. From 2003 until 2008 I studied in High School for foreiign languages " Ivan Vazov" with Spanish, Russian, English and Italian. From 2008 until 2012 I studied Economics in Plovdiv university "Paisii Hilendarski" . i ended up with bachelor's degree as an economist. As a child I used to sing in choirs then in the age of 15 I started taking singing lessons and piano lessons. I used to visit salsa classes and zumba dance. In 2014 I tried to make a few demo ... songs. the lyrics and the music where mine. My dream was always to be on stage performing singing and dancing shows and have my own songs and video clips. 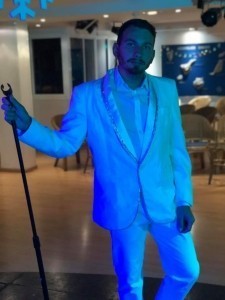 From 2010 - 2014 I was performing in different bars in my home town Plovdiv in Bulgaria, while I was Working as a cashier and as a cash office responsible in the Retail Bussiness for clothes brands like H&M and LC Waikiki. Apart from that I was also working in some private parties , birthdays, anniversaries, new year's Eve, etc , by helping with the preparation of the events - prepare the food, set the tables, prepare the decoration, being a DJ in the evening or making Public Relations with the guests. I have experience in front of a camera, because I have been taking part in some TV program ... mes to give an interview or to sing something. As a child I used to take part in some Movie Prductions that were shooting in my town, even if I didnt have any specific role. In 2016 I entered in the Entertainment Industry by starting working for Thomas Cook as an Entertainer and later as a Team Leader. I have already worked in Menorca, Mallorca and Tenerife and I have already a few seasons behind my back. The work is based on running, daytime activities - darts, pool, french boules, sjoelen, zumba, yoga, pilates, aqua fitness, water volleyball, water polo, table tennis, tennis; Hosting evening show/ game shows- Bingo, Mr and Mrs, Perfect Couple, Dance Floor Mayhem, Boom shake the room, Karaoke; Organizing White and Tropical parties; Performing Solo Cabarets (with all the songs that can see in the Ste- List section) and MOST IMPORTANT performing 5 different singing and dancing shows - 80s, Rock, Musicals, Queen and Elvis, 21st Century.