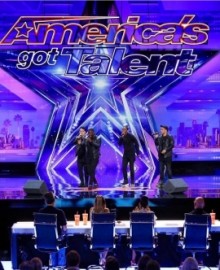 Final Draft, a male musical singing group, was on season 12 of NBC's America's Got Talent in which they received a standing ovation & wowed the crowd! They have over 7 million views on Facebook post, cover all music (RnB,Country,Spanish). All social media @4finaldraft
: 404993XXXX Click here to reveal
full number

When contacting this member, please state that you are viewing their Entertainers Worldwide profile.
Request a Quote
Share this Page:
Profile Views: 430
Report this profile