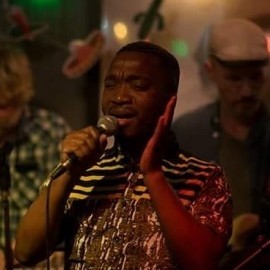 Hendrick “Itumeleng" Monyeki is one of the only jazz crooner’s in South Africa today. He sings ballads with a distinctive mellow tenor, driving the Gauteng Jazz Orchestra(South Africa) in his time with them as if he was the new embodiment of Danny Williams.He Shared a
Request a Quote
Share this Page:
Profile Views: 112
Report this profile

Hendrick “Itumeleng” Monyeki
Hendrick “Itumeleng" Monyeki is one of the only jazz crooner’s in South Africa today. He sings ballads with a distinctive mellow tenor, driving the Gauteng Jazz Orchestra(South Africa) in his time with them as if he was the new embodiment of Danny Williams.
Hendrick has been fortunate enough to work with many accomplished musicians which includes Kgotso Makgalema,Tebz David,Lionel Petersen,James Okon,Uche,Jonas Gwangwa, Sibongile Khumalo, Selaelo Selota, Moreira Changuica and Mimi Ntenjwa,David Beck Trio to name a few.He Shared a stage with Int ... ernational Artists like:Lala Hathaway,Rahsaan Patterson,Dee Dee Bridgewaters,Lizz Wright,Randy Crawford,Joe Sample,Kirk Whalum,etc Hendrick has also had the privilege of Performing at various events across the country that include the:
Mapungubwe Jazz Festival in 2005
Soccerex 2008
Presidental Inauguration of President Jacob Zuma in May 2009
National Order awards-Presidential Guest House April 2010
International Cape Town Jazz Festival 2006 and 2010
State Theatre September 2011
Standard Bank Joy of Jazz 2010,2012,2014
50th birthday party of MTN CEO Phuthuma Nhleko
Union Buildings Pretoria Freedom Day 2012
Macufe 2011,2012
Up&Coming-Imbumba- Rosebank
Mama Albertina Sisulu Gala Dinner(Rosebank)-2014
Hendrick has worked as a Music Teacher at Music Academy of Gauteng In Benoni,East of Johannesburg for 5 years,teaching Voice,Theory Of Music,and Aural Training.
He has Grade 5 in Theory of Music with Royal School of Music in London
Grade 2 and 4 In Theory of Music with UNISA
Certificate in Music with Ochrim School Of Music(Pretoria) under Department of Education
Certificate in Performing Arts with MAPPPSETA