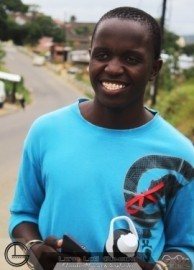 I'm a Singer, I sing RnB and sometimes I do rap music, I don't have a live band playing for me, I use a performance pack or backing tracks
Request a Quote
Share this Page:
Report this profile

U started my music in 2007, since then I been doing rap until in 2014 when I went to DUT I learned notes and Oprah and I could express my feelings through singing not just rap. When I perform I only need the stage and a microphone and then I can sing

Chair for the beginning of the performance,

Lizwi Cyprian Gumede: (LcG)
Film Director, Scriptwriter, Set, logo & poster Designer, Producer,
video operator, photographer, beatmaker, Editor, Rapper, DJ, Singer & Actor.
Born in KwaZulu-Natal on the small South Coast village named Bheula and raised on the other close village named kwaQiko, before he even begin school he used to draw pictures of cars and houses with a pencil. At the age of 11 he started writing and singing Hip-Hop, and In the year 2012 he started a Hip Hop crew with Masiya and C’phiwe who heard him rap and wanted to sing with him.
They were doing their Grade 11 at t ... he time, Masiya and him recorded their first songs in the same year at Dududu by Simphiwe(Jabavu) at Jabavu records. With C’phiwe out of their team they decided to call themselves GMD’z in short for Gumede’s as they shared their surname. later that year they featured Buyani Gumede stage name Tha Hydra and recorded a track called GMD’z, during the recording session in the studio, he shot and edited their music video. In 2013 Lizwi and Siyabonga Gumede (Masiya) graduated high school together and went to Durban University of Technology (DUT) where they majored in acting. Lizwi focused on being behind the scenes as well as being on stage, He became a Camera person, Set Designer, Director, Actor, video editor, puppeteer and also a Writer.
Tha Hydra and LcG started their own company GMD’z Entertainment in 2014 which dealt with everything from music producing, beat making , recording, filming, editing, music shows hosting etc. In 2015 he wrote and finished his first mixtape called GMD’z, In 2016 he finished another mixtape called Love & Hate. In the same year he wrote a Theater piece called The Biggest Guilt and directed it at DUT, and for his final exams he then wrote a short film called Betrayal and played a supporting lead character, he then finished his third year at DUT. In 2017 he went to Johannesburg where he was featured at Skeem Saam as an Extra and the following month he was in a TV show that also played in SABC 3 called Is That A Fact! as an audience guest.He then worked with a Company named Oojimah as a Film director on a mini series called Oshun which was rehearsed in Pretoria. As that series moved to Port Elizabeth he then moved back to Durban. Oojimah wanted him to work for them as a Area manager in Durban for 6 months.
In 2018 he joined Izigi ZoMkhumbane Organisation (IZO) which is an NPO, and joined a band under that Organisation called Izigi ZoMkhumbane Allstas(IZA) as a vocalist, DJ and also as a rapper, where he worked with the likes of Mkhonto Dube, Siyabonga Dludla, Ndumiso Shangase, Sifiso Mkhize, Phumelela (Mzala2), Mbusi Ndlela, Kwanele Ndaba etc. In the middle of 2018 they started a Television show called Street Reality Tv and a Magazine Street Reality Magazine, where he works as a Director, Video operator, Video Editor, Director of photography, and sometimes a photographer and a Magazine editor. He sometimes works for KCAP teaching Set Design and Craft making

As I said I started in 2007, I was the first recording artist from my village and I have inspired lot of upcoming artists to go for their dreams and do what they feel is right, I have preformed in theaters during plays or in intervals, I have performed in weddings, parties and I have preconditions in big events sharing a stage with big names in the industry. I haven't traveled a lot because I have only been to Durban and Joburg but I have made my Passport and I'm always ready.