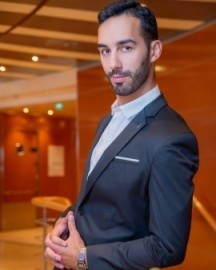 (no reviews)5.0
Country: Spain
Based In: Madrid/Spain, Spain
Performs: Worldwide
From: Contact

• Costa Cruise 2016 - 2019
Musician onboard Costa Cruise Ships. In constant interaction with an international audients across the
Mediterranean Sea, Atlantic and Indian Ocean and the Suez Chanel. Complementary participation as a judge
in the edition onboard of the popular TV show “Tu si que vales”.
• The Voice of the sea 2016 - 2019
Participation as a Guitar player in the live band for the edition of the show “The Voice” onboard Costa Cruise
Ships
•Musician in Argentina 2009 – 2015
- Guitar Player and Voice for Ricardo Soulé, one the firsts and most recognize Rock M ... usicians in the
country. Doing tours all over the country with a Rock formation and occasional Orchestra. Especial
participation on the 200 anniversary celebration of the nation playing as a duo in the main stage in
front of more than 2 million people. Video available on YouTube.
- Guitar Player for Vox Dei, one of the main and firsts Rock Bands in Argentina.
- SouleArte Productions: Cordination of shows, Creation of working infrastructure, Press and Public
relations for multiple bands in the Rock Atmosphere.

Request a Quote
Share this Page:
Click here to view all of our Male Singers on Entertainers Worldwide
Browse all Entertainment Hire options!