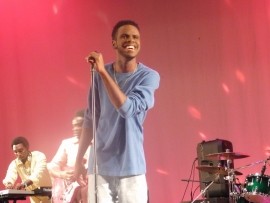 (no reviews)5.0
Country: Jamaica
Based In: Jamaica
Performs: Worldwide
From: Contact

Passionate and soulful crooner. A student at University of the West Indies pursuing a degree in Entertainment and Cultural Enterprise Management. A student of Music and has received voice training from noted bass-baritone opera singer, Dr. Curtis Watson.
: 876-773-XXXX Click here to reveal
full number

It took one misfortune to finally propel Mario Spencer into his God-given realm, where he is presently making waves as a passionate and soulful crooner.
Once a valuable minor league player with the Harbour View Football Club, Mario harboured the dream of one day making the internationally renowned Chelsea football team.
However his dream was dashed to pieces when, as a very active sixteen year old attending St Georges College, he was diagnosed with osteosarcoma, a very aggressive bone cancer.
The cancer which started in the left shin bone area, was so aggressive that his doctors recomm ... ended amputation in order to save his life. However, he was also offered him the option of limb salvaging surgery which finally saved his leg but left him with a life threatening infection. Holding on to his faith, Mario managed to beat the odds and now eleven surgeries, several doses of powerful antibiotics and nine rounds of chemotherapy later, Mario is showing to the world that he is here for a purpose.
Mario was born on March 14, 1993 and grew up in the community of Harbour View in Kingston. He was an only child up until age eighteen, when his baby brother Tariq Spencer invaded his home space. Mario attended Holy Rosary and New Hope Preparatory Schools before passing his GSAT exams for St Georges College. Presently he is a student at University of the West Indies where he is pursuing a degree in Entertainment and Cultural Enterprise Management. He is also a student of Music and has received voice training from noted bass-baritone opera singer, Dr. Curtis Watson. His voice has been likened to that of American R&B singer Aaron Neville but Mario brushes aside the compliments, settling for his own originality.