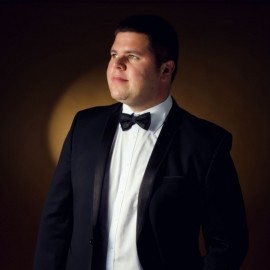 Matthew Long is a vocalist in the traditional pop style, specialising in songs made famous by the great crooners including Perry Como, Frank Sinatra, Matt Monro, Nat King Cole, Dean Martin and many others.
: 0756133XXXX Click here to reveal
full number

When contacting this member, please state that you are viewing their Entertainers Worldwide profile.
Request a Quote
Share this Page:
Profile Views: 267
Report this profile

Repetoire includes:
And I Love You So
Catch A Falling Star
Come Fly With Me
Everybody Loves Somebody
Fly Me To The Moon
Hello, Young Lovers
It’s Impossible
I’ve Got You Under My Skin
Let’s Face The Music And Dance
Magic Moments
Night And Day
Papa Loves Mambo
Unforgettable
The Very Thought Of You
Witchcraft
You’ll Never Know

Matthew has versatile experience as a live performer having worked with trio and quartet ensembles through to big band configurations.
His musical CV includes two tours, a year residence with a Midlands based Big Band and many private and public performances with backing tracks.
Matthew is equally at home performing with backing tracks or live musicians and has a wealth of both pre-recorded backings and printed charts readily available.
In November 2017, Matthew completed his second tour, backed by live quartet accompaniment. This particular tour was performed in duo with his dear fri ... end and fellow vocalist, John Walton; and funded by Arts Council England.
Matthew has also recorded a number of original songs written by another dear friend, Lamar Pecorino - a musician and songwriter from Austin, Texas, USA. Matthew’s first album “Dancing With You” takes its name from one of Lamar’s compositions, which is the title track.
Whether you are looking for a concert performance, background music or anything in between, Matthew will be glad to accommodate your requirements.

Matthew Long - Male Singer - Solihull, West Midlands Event Location: Hilton Hotel, Bromsgrove, Birmingham Event Type: Life After Stroke Awards
Matthew Long gave an exceptional performance at our West Midlands Life After Stroke Awards event in November. His vocals are exceptionally good, and the music suited our event perfectly with such a range of guests in the audience. He will bring some style, sophistication and toe tapping entertainment to any event. Event Manger, Stroke Association
Reviewed by: Tony Banks
Matthew Long - Male Singer - Solihull, West Midlands Event Location: The Royal Star And Garter Home, Solihull Event Type: Reception Performance
Absolutely fabulous performance. One resident told me “Pitch perfect, thoroughly enjoyable”. We’d have him back in a heartbeat to perform at any time.
Reviewed by: Annette
Matthew Long - Male Singer - Solihull, West Midlands Event Location: Royal British Legion, Rubery, Birmingham Event Type: Lounge Performance
We had the pleasure of Matthew performing for us on Saturday 25th January. What a fantastic show he put on for us. The crowd were singing along and the atmosphere was buzzing. A good mix of songs to suit all ages. A true professional, Matthew gave his ore! The ease with which he sings is just wonderful, he is a very talented young man, who deserves to go far. Thank you Matthew we hope to see you again
Reviewed by: Caroline Harris