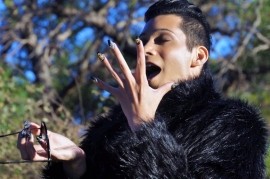 (no reviews)5.0
Country: Australia
Based In: Australia, Western Australia
Performs: Worldwide
From: contact for quote.

Mickey Magic is a flamboyant and eccentric live entertainer with a bold and extroverted performance style. Covering Classic pop hits from the 80s, 90s, and now, Mickey Magic can charm an audience of all ages with his captivating dance moves and energetic renditions of all the timeless chart-toppers from the past 3 decades.
Influenced by artists such as: Prince, Savage Garden, Culture Club, MJ, Janet Jackson, Billy Idol, David Bowie, Britney Spears, Queen, Bobby Brown, Mariah Carey, and many more he reaches a wide variety of musical artists aiming to please a variety of musical fans. Accompan ... ied by a guitarist or Live band, Mickey Magic ensures to give his audience a theatrical and ostentatious stage show that is bound to cast a spell and get everybody moving.

Born in Perth, Western Australia, Mickey took to music at a very early age grabbing anything he could find that would make a sound. Influenced by a wide range of artists such as Culture Club, Savage Garden, Prince, David Bowie, Janet Jackson and more, Mickey found singing and dancing came very naturally and begun expressing his own inimitable style. Showing little interest in school, it was clear that ‘professional performer’ was his only path and began developing his art. As his talent progressed, he began writing his own music and seeking out collaborations with top Perth producers. Taki ... ng to the Perth music scene with his flamboyant and bold performing style, Mickey began thriving in this new environment receiving a great response from his audiences. Mickey Magic has created a fresh and exciting new sound, developed a ostentatious stage presence and outrageous dance moves that should not be missed!