I'm looking for:
near:
No valid location selected.
You Are Here: Singers / Male Singers / Hungary / Teo 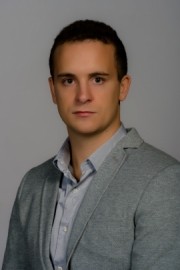 (no reviews)5.0
Country: Hungary
Based In: Pest, Hungary
Performs: Worldwide
From: Contact

When contacting this member, please state that you are viewing their Entertainers Worldwide profile.
Request a Quote
Share this Page:
Profile Views: 194
Report this profile

Name: Spiriev Teodor
Place and date of birth: Budapest, 14 December 1992
Live in: Páty (Pest county)
Beginnings: After winning the ’Who knows what?’ contest at my grammar school in the category of singing (where I performed a capella Janis Joplin’s Mercedes Benz), in 2010 I entered the first X-Factor in Hungary. I achieved a nice success reaching the Judges’ House, thus I finished in the top-6 in the category of ’Men aged 16-25’.
After that I had several performances across the country, which proved to be a great experience. Though I was approached by various ... talent-show programs year by year, I temporarily preferred to focus on learning both in singing and in civil life.
Training: Several renowned vocal teachers have helped my progression.
First I attended Micheller Myrtill’s then Éliás Gyula Jr.’s lessons.
It was a major step when I was trained by Joshua Alamu, an internationally well-known English vocal teacher in London. Joshua Alamu has worked with British TV shows such as 'The Voice' (BBC) or 'Pop Idol' (ITV) and he has helped preparing several Eurovision Song Contest participants, as well.
I continue taking vocal trainings, currently mainly at Magyar Hajnal Énekstúdió.
Performances: Although till now I have been focusing mostly on training, I have had quite many performances, too. Besides singing in clubs and at small and medium events, I had my own concert for 500 people, but I have also performed in some sport events where I sang for several thousand spectators.
So far I have performed abroad in London and in Cyprus - with great success.
Civil studies: I graduated at Eötvös Lóránd University Faculty of Science, I received my BSc degree in Geography in 2014.
I finished my studies in 2017 at Szent István University and received a magister (MSc) degree as an Environmental Engineer.
I have also a state accredited language examination certificate of proficiency level in English and intermediate level in German, but I also speak Italian at a basic level.
Own Song: I have my first own composition, called ‘Mother Nature’ for it, which is a pop-rock song.