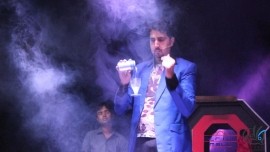 1
(1 Review)5.0
Country: Pakistan
Based In: Pakistan/Karachi, Pakistan
Performs: Worldwide
From: ₨5000

I love to do the impossibles because I am master of the impossibles! I am Mentalist, Stage Magician, Stage Illusionist, Close up magician & walk around magician.
: +92-0300295XXXX Click here to reveal
full number

Afzaal Afridi is the most demanded illusions, Mind Reading act & Street Magic performer in Pakistan. His unique presentation style makes him entertaining, charming and stylish.
Afzaal has performed for corporate and private engagements all over Pakistan. He also has been repeatedly hired internationally for his award-winning shows and been featured in various international television appearances. Besides that, his unique ideas for magic tricks were published by an international association for the use by his peers in the industry. He has had his unique magic published for other magicians.
...
Afzaal has performed stunning effects such as “hypnotizing thousands of peoples from 52 countries, via a live Radio show”– a feat that was never accomplished by any magician in the history of Pakistan. Afzaal also has been featured in many published newspapers, magazines and even news channels in Pakistan, making him one of the most recognized celebrities in Karachi, Afzaal’s pictures have been published in Jang News Pakistan almost 78 times which has never published for any other magician of Pakistan except Afzaal Afridi.
International Magicians Society President Mr. Tony Hassini, flew to Pakistan to present the prestigious IMS Merlin Award to Afzaal as “The Best Magician of the year 2011”. Afzaal is currently the only magician in Pakistan to hold this title and award.

MASTER OF THE IMPOSSIBLES
I can perform unbelievable illusions like David Copperfield, Brett Daniels & Lance Burton; they are great stage performers in the world.
I can make disappear any kind of biggest building!
I can fly like swimming under water and I can be levitate anywhere any time.
I can make levitate a girl in the air.
Girl vanishing or Car Vanish in front of live audience.
I can cut to my body in 2 pieces some magician cut a girl’s body but I cut my body.
I can be appear and disappear myself on stage.
And many more unforgettable illusions I can perform!
Thought-Reader
...
I can read anyone’s mind anywhere any time.
I can predict that what is going to be happening in few seconds or minutes.
I can do magic with home TV viewers when I am on RADIO or TV and doing live show!
Street Magic
I can perform unbelievable close up magic & micro illusions.
Like 2 Card Monte.
Prohibition
Coin bite
Torn & Restore Signed Card
Levitation
Wow! Card visual effect
Talking dye
Change 10 Rupees into 5000 Rupees
And many unbelievable and unforgettable illusions & Tricks.
Escapology
I can perform escape magic and illusions.
I can make disappear from the stage and reappear among the audience.
And few stunts I can perform out door.
Mentalist
I can bend glass, spoon, Fork, Nails like butter in my hands.
I can make stop watches or you can say I can stop Time

Afzaal Afridi - Mentalist / Mind Reader - Pakistan/Karachi, Pakistan Event Location: Karachi Event Type: Corporate event 13th August 2014
Afzaal always brings his best energetic and magnificent show for us he does and this is really really cool because you never know what gonna happen next? Get ready for the information you didn't know you needed.
Reviewed by: Phillip Morris