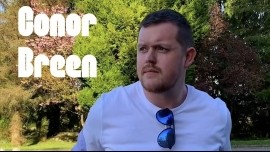 Mentalist/Magician Conor Breen performs a mixture of virtual magic and mentalism to shock and surprise his audience from their own homes. During the show, Conor will connecting and engaging with his audience, while mixing real mind reading with magic.
Request a Quote
Share this Page:
Report this profile

I have been performing magic and mentalism both virtually and physically over the past number of years!

My name is Conor Breen and I am a Mentalist and Magician. I have been performing magic and mentalism for over 15 years, and have been extremely active in more recent years.
I am also an active secondary school teacher in Ireland, and I currently teach English and Religious Education at all levels. As unusual as that combination may seem, you would be surprised how many times I have to work my magic in the classroom as well.
For a lot of people, they will know me from social media platforms, such as Tiktok and Instagram. I regularly post magic content on a daily basis and have thousands o ... f followers that watch me live streaming online on Tiktok every night. This is where I spend a lot of the evenings engaging and getting to know my followers and also get to hack into their minds virtually for a couple of minutes.
If you haven’t guessed it already, I absolutely love what I do, and my job as a magician and mentalist isn’t really a job, let’s be honest! It’s something unique and unforgettable that I get to show to the world, and be able to make people laugh, smile, or even cry at the flick of a switch! I look forward to hearing from you, and can’t wait to work with you!

Many will say my shows are fun, interactive and engaging, and I always create a unique and exciting atmosphere while performing at different events. Mixing magic with mentalism, I will leave you second guessing whether or not I had the ability to influence you, and really hack into your mind!

Over the past few years, I have tailored my magic and mentalism to be performed online and I have been working ever so hard to put together a show that I now perform virtually via Zoom. Although the past year has been difficult for so many people and we have been restricted to our own homes, you can now take part in and enjoy my Interactive Virtual Magic Show, where I promise you will be amazed at how hard magic can hit you from sitting in your own home.

The 15 minute Virtual Personality Test will take you on a journey, finding out who you really are at the core. Sometimes in life, we find ourselves isolated and lost, wondering who we really are.

Do you often surround yourself with the wrong people, or people who do not bring out the best version of you?

Do you often find that you go through various relationships, without knowing why there isn’t real connection?

Do you often feel unsure about who you really are?

With the Personality Test, we can answer some of those questions and find out who you really are, both psychologically and subconsciously.

After all, if you don’t know who you are, how can anyone ever get to know the real you?