You are contacting Fred Zimmerman | The Chicago Mentalist 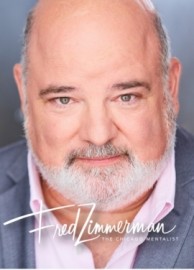 Fred Zimmerman | The Chicago Mentalist is a respected actor, and when he's not getting into the heads of his characters, he uses his acting skills to get into the heads of his audience. Fred's a fake ... but he'll make a believer out of you.
Request a Quote
Share this Page:
Profile Views: 112
Need Help?
✖