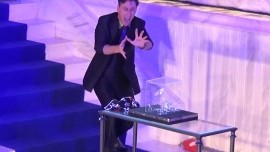 When contacting this member, please state that you are viewing their Entertainers Worldwide profile.
Request a Quote
Share this Page:
Profile Views: 892
Report this profile

With over 30 years experience, I have performed in over 10 countries in the world. Bringing joy and entertainment to audiences of all ages and varieties. If you seek a great performance with various entertaining skills, look no further.
I have a three piece act which contains Magic, Mentalism and Escapology. I am still considered the foremost on Escapology in South Africa and and classed by colleagues around the world to be the foremost with Cable-tie Escapes. I am also able to tailor my show to my clients needs and am able to incorporate things into my show when necessary (If given enough ... preparation time before the day of performance).

Wolflock has been performing Magic now for around 3 decades and has
experience in all forms of magic. Even though his Magic is classed in
the bizarre and mentalist section of the profession, he has performed
on stage, table hopping, street magic, corporate, close up and
personal shows. He has performed in various countries alongside some
highly regarded names in the industry. Wolflock has also written
numerous articles for magic magazines and newsletters, as well as, been
featured on Television, newspapers, radio and internet. Whether you
choose the debonair suit wearing performer, or ... the Gothic style
black coated performer, your audience will be equally amazed at the
mind-reading, glass breaking, metal bending marvels of Wolflock.
Wolflock has gained all the knowledge and experience he can from as
many forms of escapes that he could through years of trial and error.
Wolflock’s signature escape has been the 6 cable ties, which are
bound individually to each of the fingers when the hands are held
together and one of the wrists, and 20 meters of Chain with 7 - 10
locks, which volunteers are able to inspect, bind him with and watch a
full view escape. Wolflock has performed Escapes in quite a few
countries and enjoys the challenges of the local community to gain
more insight to Escapes as well as give the local communities a grand
show using materials and knowledge they are used to.
His enjoyment to entertain others has taken him on some wild
adventures around the world. Some of his experiences have been: to
escape from handcuffs and bindings of the police (And helping the
police to know what to do when binding criminals); to escape the
bindings of the Boy Scouts in Thailand and helping them with knots;
performing magic in some of the most unusual places; consulting for
other performers in various countries; Using magic to educate students
in many schools; setting up unique show, to launch new products for
some leading corporations; present the wedding rings to newly weds in
the most unique and magical way; helping charities to raise funds;
participated in a world wide event called WEAR (World Escape Artist
Relay) in 2005. No matter the function, Wolflock is able to tailor the
show to your needs.

Wolflock - Mentalist / Mind Reader - International, Gauteng Event Location: Various- South Africa Event Type: Variety- Closeup, Cabaret, Stage 31st October 2007
I have had the pleasure of working with Wolflock numerous times over a number of years from 1998 onwards Wolflock has helped me to develop and Co-produce shows and acts from the early concept to final performance It has been an honour to work with such a diverse, talented and dedicated professional some of our events were a true test of perseverance. It has been great to see Wolflock develop his performance style. If you want a show that is Amazing intriguing mystifying or leaving you quivering on your socks (if you want). Wolflock can bring it all.
Reviewed by: Darkmagi
Wolflock - Mentalist / Mind Reader - International, Gauteng Event Location: Henley on Klip, South Africa Event Type: Regatta; Birthday Party; Year En
I have had the privilege of watching Wolflock perform numerous times and each time there was variation and new acts. I would highly recommend him to anyone wanting to hire him for any function.
Reviewed by: Ann von Brandis

I have performed in Various countries around the world. Some highlights: I was able to (With the help of some other performers) raise over R100 000 for a little girl who was suffering with cancer, I was part of the 2005 WEAR (World Escape artist Relay) challenge where a number of Escape Artists from all around the world did an Escape on the same day, I did a big Magic and Escape show in Thailand for the Annual Boy Scouts Camp (many schools involved), have done numerous Weddings in China where I have tailored my act to reveal their wedding rings in a magical way, many Corporate events (in vario ... us Countries) where I have had to introduce a new product release via magical means, I have been interviewed many times in connection with Entertainment and have even had some of my notes published in other magicians' books.