You are contacting The Bublé Show with Shane Hampsheir 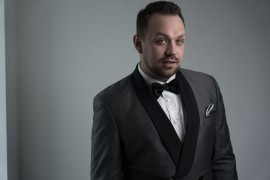 So much so does Shane sound like Michael Bublé that Universal Records asked Shane to record the hit single 'Home' for several of their compilation albums, which have sold over 200,000 units World-wide. Shane is also available to perform a generic swing/pop music show.
Request a Quote
Share this Page:
Profile Views: 333
Need Help?
✖