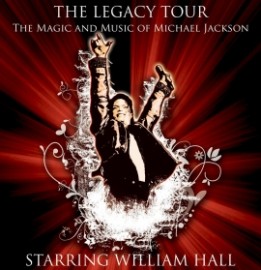 (no reviews)5.0
Country: United States
Based In: Nevada
Performs: Worldwide
From: Contact

"The Legacy", is not only a world class show, but it is the one and only Michael Jackson tribute show with actual Michael Jackson staff and band members, It was created by and star's the dynamic showmanship of William Hall who embodies the voice the dance character and persona of MJ to perfection, he has appeared and performed in venues all over the world from Las Vegas to Berlin, William has entertained artist such as Diana Ross, Katherine and Joe Jackson and was also the winner of "The Worlds Greatest Double in Europe and is known throughout the industry as clearly the best. He is assembled ... by cast members such as (Guitarist) Tommy Organ from Michael Jackson's "This Is It”. The show is musically directed by (Bassist) Sam Sims long-time work affiliate to MJ studio and stage and world redound Bassist. On (Keyboards) is Morris Pleasures who did studio work for and toured with Earth Wind & Fire and on (Drum,s) we have Michael White who has played and tour with many top named recording artist such as Janet Jackson. The show is choreographed by LaVelle Smith Jr who choreographed and danced in both the BAD and Dangerous Tours, it features three prestige background vocalist which feature Kevin Dorsey and Ken Stacey who both worked with MJ on the Bad Dangerous and This Is It tours. The show is engineered by the great Michael Prince, who was Michael’s personal engineer for over 15 years and also engineered in both the “This Is It tour and “This Is It” the movie. And then we have the four incredible Legacy Dancer’s featuring Kane Silver, Patrick Packing, Malik Colman and Junito Sanchez who have all worked and work with the biggest names in the business. Together this exceptional cast recreates the soul and passion of MJ's music from the amazing vocals to identical choreography to the replica of costumes and so much more, this show recreates the most authentic and electrifying Michael Jackson concert experience you will ever see in the World.