I'm looking for:
near:
No valid location selected.
You Are Here: Musicians / Ukraine / Aleksandra Ostrykh 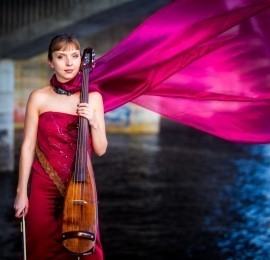 (no reviews)5.0
Country: Ukraine
Based In: Kiev, Ukraine
Performs: Worldwide
From: Contact

Aleksandra Ostrykh is a talented Cellist. One of the things she enjoys the most is playing music and sharing her talent with others. She will take you on a journey through modern, classic and country music.
: 0038 093 627XXXX Click here to reveal
full number

When contacting this member, please state that you are viewing their Entertainers Worldwide profile.
Request a Quote
Share this Page:
Profile Views: 142
Report this profile

The one that speaks the language of music
Last night was incredible! Long dreamed of escape from the bustle of everyday routine into something magical and beautiful. And I did it thanks to Aleksandra Ostrykh. Her solo concert on the electric cello I will remember for a long time. From the very first moment, as soon as the bow touched the strings, a familiar reality ceased to exist, and we plunged into another world, where they speak the language of music and feelings. All the musical pieces were opened for me in a different light, with a completely new way. I felt so much range of feelings a ... nd emotions! Especially touched melody that Aleksandra has devoted to her parents, it is at her performance, I felt what it means when the music speaks to you, straight from the heart to the heart. It was just indescribably! The performance itself was very dynamic, lively and humorous.
In general, it was something special. I guessed that the electric cello cannot expect a boring cello classical performance, but what happened yesterday surpassed all my expectations

Oleksandra received her musical education in the Donetsk Music Academy, which is known for keeping the traditions of the world famous Russian Cello school alive. She started playing the Cello at the very young age of five years when she demonstrated the fantastic abilities which, with the years developed into a deep beautiful sound and virtuosic technique.
Her musical career includes a variety of music competitions and concerts. She is known for being a soloist of the Cherkassy Philharmonics Orchestra. Oleksandra also performed throughout the Ukraine including the Ukrainian National Philhar ... monic Hall. She was a member of the modern music project “Quarta +” which took part in the renowned Ukrainian festivals which included "The Two days and two nights of modern music" and “Kiev Music Fest”. Her achievements also included a release of the CD album which brought a new flavor into the world of modern Ukrainian music. Oleksandra was a member of the “Aurora String Quartet”, which performed throughout the world and had great success among people of different nationalities. During last few years Oleksandra plays on unique electro cello. Her solo performances leave an unforgettable impression in hearts of the audience .

She has played in many well known orchestras, string quartet and competed on big events as a soloist throughout Europe, India and Cruise lines.
During last years Oleksandra plays on a unique electric cello. Her solo performances leave an unforgettable impression in hearts of the audience .