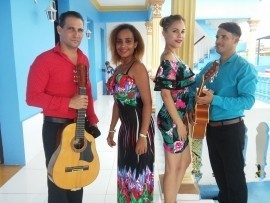 (no reviews)5.0
Country: Cuba
Based In: cuba, Cuba
Performs: Worldwide
From: more than $1500 each month

musical director guitarist bass player,composer,singer.
I am the musical director of the Son Cafe Creme Quartet I am the guitarist.(with a blue shirt on the photo.)I am preparated to perform as a solo vocal and guitar player I speak English , french and also I can sing some songs in Portuguese Italian and Germany too.!! NOW I AM SENDING YOU THE DOSSIER of my Quartet just in case you want to hire us.we are ready to work ASAP.I am ready to work as musician solo too.sincerely.Royler.

CURRICULUM.
ROYLER TORANZO SUAREZ.
Date of birth: January 5, 1985
1996:He begins to study in the conservatory of music in HOLGUIN CUBA. as a classical guitar player.
2003-2005 graduated as technical in national and international cuisine.
2005.He was invited to play in the final show of the 14h festival of youth an students in Moa .Holguin.
2005.He begins the Foreign school languages in Holguin ,Cuba.
2008:He is the manager and the musical director of the Latin Show in Gurdalavaca.
2008:He works as manager and Director of the classical music band in Rafael Freyre,Holguin ... during 5 years.
2013:He had been collaborating with young directors of musical chorus from many different coun-tries.
2014:He works in Varadero Matanzas in the Melia las Antilles Hotel.
2016.:He works in Havana in the Casa de la Musica de Miramar.
He has been working in privates schools teaching Spanish English and French languages and also teaching music, to the Americans Canadians and British citizens that are interested .
He had been fundamental part in the professional education of many citizens from several countries and also Cuban people.
He is the director of the Son Café Crème Quartet.

more than10 years of experience