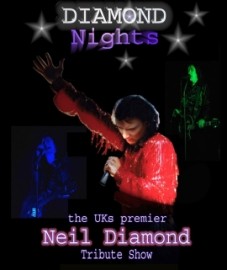 (no reviews)5.0
Country: United Kingdom
Based In: Leicestershire, East Midlands
Performs: Worldwide
From: £500

Diamond Nights the UKs premier Neil Diamond tribute show voted tribute of the year two years in succession
No other Neil Diamond tribute comes close Mike Leigh's Diamond Nights tribute show has performed all over Europe and the Middle East to sell out houses with 100% re-bookings this is the tribute show for your venue you want a tribute that sounds like Neil Diamond on every song that covers all the hits faithfully the voice the look the moves. Then it's Diamond Nights
Also available as mike Leigh solo guitar vocalist Mikes soulful 3 octave voice enables him to faithfully cover 5 ... decades
Of number one hits and forgotten classics from all genres rock pop reggae soul flunk blues Motown and some of the most outstanding heart lifting ballads from the 60s to the present day. Both shows can be tailored to suit any audience
Available worldwide

Mike joined his first band at the age of 15 it was a rock blues outfit playing everything from pink floyd to guns N roses when he was thrown into the deep end as lead vocalist and frontman
Since then he has played and depped in many bands covering many styles he then spent 5 years as a session vocalist and sound engineer in various studios. Mike got back into the music scene after forming first a trio the Jury then two very successful duo's mac n tosh and Voodoo. The latter being a boy girl duo after launching his tribute show 5 years ago to great success. Mike Decided to revive his s ... olo show and has built a solid reputation as a top performer among his peers