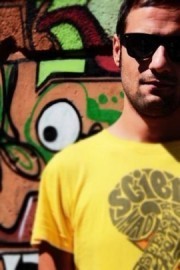 Mixing live on the CDJ 2000 and DJM-900NXS
Request a Quote
Share this Page:
Profile Views: 139
Report this profile

Besnik Koshi aka Extenzion was born September 12th, 1984 in Sarajevo in the corridor of the maternity hospital since he was so impatient to see the world around him. He started showing interest in the electronic music at the beginning of year 2000 when he attended festival „Futura“ which was first festival of this kind in SE Europe. After that he joined organization „Positive Sound“ where he started learning and improving his knowledge as well as working on promotion of parties and electronic culture in Sarajevo. At the beginning of year 2005 in cooperation with a very good friend of h ... is, Mersel Bujak (aka Infected) he started working on a concept of a radio show „E Music Magazine“ on a local radio station 202 which was always symbol of urban, alternative music and experimental sound in Sarajevo. After sudden success of this radio show at the end of year 2005 they started working on the project „10 years of electronic scene in Sarajevo“ which was broadcasted as New Year's program on Radio 202. After that they worked on promoting Festival Exit (in 2005 and 2006) and through their voluntary work supported rebuilding Dom mladih – Center Skenderija which was simbol of youth even in the past and through that accomplished cooperation with Revival Festival. In 2006 he started working as a resident DJ in Sarajevo's clubs „The Bar“ and „Cinema Sloga“ where he shared his knowledge about electronic music and love for it through his sets that were always different and which were blending Deep-House, Tech-House, Progressive-House and Techno sounds. In July 2006 he had joint performance with DJ Incefected under the name „Infected & Extension“ on a festival Exit on a set DJ Superstar where they had impressive performance. After that performances were just lining up in Bosnia and Herzegovina, Croatia, Serbia and Kosovo where he always tried to transfer his positive energy and knowledge he gained. He created many compilation CDs that left impressive impact and got amazing feedback from the audience (Progressive Sevdah, Cold & Heat, I Go Deep, Elixir of Life). He established cooperation with Darin Epsilon and Eelke Klejn through promotion of their shows on Radio 202 and educating people on current sound all over the world. He also worked with names like Hernan Cattaneo,Darren Emerson,Luis Junior, DJ Tarkan,Randell Jones. In the future he would like to continue sharing gained knowledge and spread love among people through his sets because life without music wouldn't be way it is today.