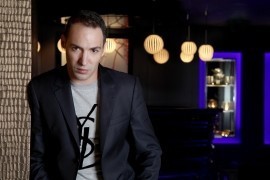 (no reviews)5.0
Country: Spain
Based In: Spain / Maldives, Spain
Performs: Worldwide
From: Contact

DJ - PRODUCER - LABEL OWNER - OFFICIAL PIONEER DJ AMBASSADOR
Dezarate is without a doubt one of the best DJ’S and producers within the electronic music scene today. His sound ranges from Deep house to progressive house, creating an amazing atmosphere, which is also ele- gant, accepted by all who listen.

  DJ - PRODUCER - LABEL OWNER - OFFICIAL PIONEER DJ AMBASSADOR
Dezarate is without a doubt one of the best DJ’S and producers within the electronic music scene today. His sound ranges from Deep house to progressive house, creating an amazing atmosphere, which is also ele- gant, accepted by all who listen.
Born in Barcelona, Spain, Dezarate has accumulated more than 18 years of playing in the best clubs and festivals in the world: Ministry of Sound (London), Smart Party’s (London), Pentagon (London), The Fuse (Brus- sels), Sonar (Barcelona), Love (Amsterdam), The Hotel (Rotterdam), Go ... dskitchen Boom-Box (tour), Love Parade, Buddha Bar (Mexico) and many more.
In Europe he represented brands from Bacardi, Marlboro, and Swatch, as well as being the official ambassador Pioneer Pro DJ in Latino Ame- rica.
As a producer Dezarate has been recognized and associated with labels including Deep class Records (Ibiza) with his track “La Noche”.
This track reached number one in sales on Beatport, along with being included in various prestigious global compilations.
Currently Dezarate is one of the premier artists (DJ/Producer) on Paul Oakenfold’s Perfecto records label. Perfecto, it’s productions, original
 tracks, and remixes have been featured in compilations across the glo- be including
Perfecto Vegas (#1 in iTunes USA), & Paul Oakenfold DJ Box (#1 US Dance charts).
“Soul is in the Air,” was released on May 5, on Perfecto Records label. On the same day it found it’s way in the Top downloads on digital sto- res, and onto the US dance charts, continually rising on the charts. It is one of the top selling tracks on Beatport.
Dezarate’s position on the charts is constant and nothing of a surprise. He has achieved 9 #1’s on Beatport, Ministry of Sound, and iTunes.
His tracks are also gracing the airwaves on some of the most important radio programs in the world; Pete Tong, Roger Sanchez, Oakenfold, Robbie Rivera, BBC, Eddie Halliwell, Harry Choo Choo Romero and many more.
Dezarate’s discography includes more than 200 original tracks and re- mixes, and his tracks have been included over 30 compilations, as well as 7 albums as a solo artist.
In August of 2011 he will debut as director and host of DJ specific reality TV show “Find Your Beat” on Planet X in Mexico.
Dezarate has started this year 2014 better than ever:
His track "Beachball 2K14" has reached all major charts worldwide as
also Top 3 at Beatport & Top 2 Swiss Dance Charts
Dezarate is also mixing the official Pioneer DJ Compilation’s which his label The Groove Society / Sony Music has the exclusivity for,
and has been working like a resident DJ in the best nightclubs in Dubai / Abu Dhabi and Maldives in the last 5 years