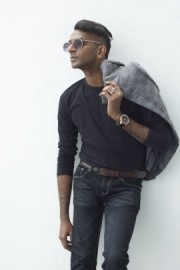 (no reviews)5.0
Country: Malaysia
Based In: Sungai Petani, Malaysia
Performs: Worldwide
From: Contact

A National levelled award winning hip hop DJ, being one of the select few of deejays who propagate the hip hop genre in the local clubbing industry, DJ Abi has been a professional deejay for the last 19 years and still going strong.
Request a Quote
Share this Page:
Report this profile

“I love being creative and keeping things fresh with my tunes, with patterns of scratching, mixing, looping and cutting my way through my sets, whilst hyping the crowd” says DJ Abi, a no nonsense work approach which has gained him major recognition and subsequently earned bookings and residencies alongside the likes of The Great Jazzy Jeff, DJ Latin Prince (Bum Squad Worldwide Founder), DJ Cheeapshot ( Fortminor), DJ Rob Wilder, Dj Acee, Dj Unique, Isaac Tucker of Spectrum, Rosie Romero and more!

Being one of the select few of deejays who propagate the hip hop genre in the local clubbing industry, DJ Abi has been a professional deejay for the last 19 years and still going strong. Well known for his scratching abilities, Abi brings an added feature to his live mix set for the crowd.
Currently DJ Abi is the resident DJ to Genting Rouge.
Apart from deejaying full time, Abi also produces when the time permits. His composition – Sinful (original mix) was featured in DJ Rob Wilders (former Hed Kandi / Pukka Up headliner and the founder of Iamstereo) summer international releas ... e 2009. In 2013 he has toured with a billboard chart topper Cristian Alexander as the official DJ. In 2015/16 toured with local Indian music artiste Viveck Ji on his first debut EP Album. 2018 is a promising year as DJ abi debuts with his first single as a rapper with Sarah Stone, an Egyptian Rapper for a track call F.u.e.d music.
Open minded to exciting new music frontiers, Abi has remixed tracks with various genres from rock to metal, punk, hip-hop, rap, r n b, techno, jazz, ambient, jungle, funk, classical and many other diverse selections. Combining the elements of old school DJ style and scratching, he delivers a free flowing style unheard of before.
With support from his regular club emcee - MC Deep (CHOONS Award best MC 2012/2013), he started making extended remixes for the club deejays initially before progressing into music composition and producing. The long hours spent in the studio paid off with the creation of 3 tracks which will be released when the timing is suitable. A music project worth waiting for with its blend of eclectic melodies and hypnotic tunes.
“Business is business, but there is always a soft spot for music, which I would want everybody and anybody to hear my hardened side, my ego, my pride and my message... I want the whole world to hear me one day… and when that happens, it will be business to greatness!!”
In 2010, DJ ABi founded Wrexxshop Entertainment – a business entity that manages deejay/emcee talents and handles parties or events. The Wrexxshop brand is derived from a well patronized theme night managed by him and over the years it has branched out to Wrexxshop DJ Studio – a premise for aspiring deejays or emcees to learn the trade professionally.

Starting the career as a DJ in the year 1999 under the guidance of many popular DJ's ensured my ability to be able to perform for just any age group. But i have shown love towards the art of turntablism (the highest level of DJ'ing mastery) and therefore has pursued into the hip hop scene thats probably the most challenging scene in the world.
A winner of the CHOONS AWARD – BEST HIP HOP DJ (MALAYSIA) 2013, DJ Abi is an individual who can adapt to any music genre but mostly ranging from the swagger art of hip hop and the smooth & sensual British type of r n b etc.