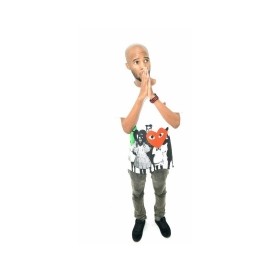 (no reviews)5.0
Country: South Africa
Based In: Sasolburg, Free State
From: £500

An entertainer at night and an entrepreneur during the day. Clothing brand and sales man.

The Deejay You Know Nothing About who hails from sunny South Africa in Sasolburg. We going back home bringing a young deejay who’s mixing and song selection has gained him a lot of respect from both young and old clubbers.
His Journey Started at an early age for the love of house music when he was inspired by the top deejays in the industry .He started of playing at birthday parties, street bashes, beauty pageants etc. with a computer, as technology advanced he later started dabbling with CDJ’s gaining the experience of the magic touch on beat matching different genres. In 2008 he met R ... ocBoys Entertainment, years went by playing at various spots which lead him to secure a residency at one of the hottest clubs in the Vaal that’s when we can say he got his big break which he deservedly earned he got to play alongside the best deejays locally and internationally such as Christos, Vinny Da Vinci, Lulo Café, Claude, Frank Roger, China, Harrison Crump, Black Coffee, Dj Shimza and more, he has also show cased his mixing skills on local radio stations. As an upcoming Dj he hopes to learn more from the industry his future looks bright

Spring Fiesta Power Play Residency DJ competition winner 2017. One of the biggest event in South Africa in October.
Having to share stage in the legends like Black Coffee has improved my work ethics and abilities to please crowds and allowing me to travel locally, which I'd like to travel worldwide to take my career to the next level