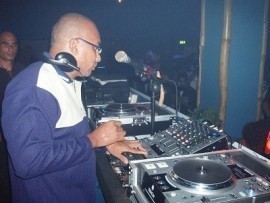 1
(no reviews)5.0
Country: Seychelles
Based In: Victoria, Seychelles
Performs: Worldwide
From: US$1500.00

I am the resident DJ at the TGA Club Avani Hotel Barbaron Resort & Spa Seychelles were i have shared the stage also with DJ Oso Loso from Dubai. At TGA i mostly mix house, dance and R&B Hip Hop and Afro music. I also do Karaoke
: (00248)258XXXX Click here to reveal
full number

When contacting this member, please state that you are viewing their Entertainers Worldwide profile.
Request a Quote
Share this Page:
Profile Views: 114
Report this profile

Well i can entertain a crowd with a pair of turntable or CD/DJs and a microphone, it can be at a wedding or club.

I play different genre of music, most commonly in dance, house, r&b hip hop. But most important is that i have a good selection of tracks that pleases the crowd.

Well i grew as an artist, since my father was a multi talented musician he used to play mostly all musical instruments and followed his footsteps. After finishing my secondary school i went to post-secondary to study Graphics. A few years later i joined a band and i was chosen to play drum and sometimes bass guitar. Later on i discovered that i had the talent to become a DJ, so i started to play local house private parties, schools gigs and the year 2000 onward i became a club Dj. Then i went on to see myself playing in mostly all the clubs and discotheques around Seychelles Islands. During th ... at time i have also shared the stage with some international dj's. In 2001 i was contracted a resident dj at one of the biggest hotel on Mahe Island (Berjaya Beau Vallon Resort) and was there until 2013. In 2013 to 2015 i was a Dj at Havana Club at Eden Island of Seychelles over there i used to play a lot of Latino and other different genre of music. Now i am the resident DJ at the TGA Club Avani Hotel Barbaron Resort & Spa Seychelles were i have shared the stage also with DJ Oso Loso from Dubai. At TGA i mostly mix house, dance and R&B Hip Hop and Afro music. To conclude, i have been through quite a long journey in my career as a Dj. My objectives was to became an international resident DJ in a Hotels and clubs overseas.

Started in 2000 in private house parties
Moved into small club 2001 and to Discotheque in the same year
2002 got a contract a the a Hotel been there for 12 years
during that time i was also performing in other club such as Lovenut discotheque
Katiolo Discotheque, Oxygen Discotheque and other clubs