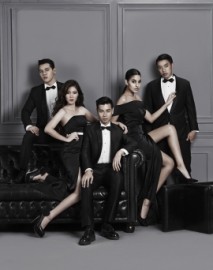 The one and only Pop-Opera in Thailand, with repertoire ranging from Opera, Musical, Pop-Opera, Ballade Pop which filled with romantic and up-tempo songs.
: +6689140XXXX Click here to reveal
full number

When contacting this member, please state that you are viewing their Entertainers Worldwide profile.
Request a Quote
Share this Page:
Profile Views: 2005
Report this profile

Featuring five singing superstars from Thailand’s first and only classical crossover musical ensemble FIVERA, these classically trained songbirds will have everyone joining them in their selection of traditional light opera and well known pop classics. Produced by BEC-Tero Music, the leading entertainment company in Thailand.
In 2010, we made our triumphant debut in Bangkok featured in many popular TV shows in many Thai TV channels including one of the biggest Channel 3. Not only we have been performing big events in Thailand, but we have also been hired to perform professionally in overs ... eas; China, Hong Kong, Singapore, Myanmar, Vietnam, Malaysia, Laos, Indonesia, South Africa and Germany. FIVERA will perform a wonderful variety of eclectic pop and rock classics that include favorites such as Oceano, 21 Guns, Toreador, Prayer in the Night, Queen Medley, You Raise Me Up, Unchained Melody, Beatles Medley just to name a few. FIVERA's repertoire is filled with romantic and well-known up-tempo songs.