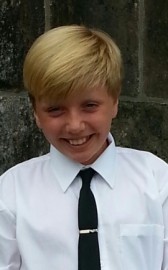 Steffan Llewelyn is a 12 year old Treble who has a passion for opera and classical music. He has achieved music qualifications ABRSM Singing Grade 4 and 5 with Distinction and Theory Grade1-5 and also been awarded Choral Silver Medal Award (Bishop's Award).
Request a Quote
Share this Page:
Report this profile

Steffan Llewelyn is a 12 year old Treble who has a passion for opera and classical music. He enjoys playing the piano as well as playing the saxophone.
He has recently achieved music qualifications; ABRSM Singing Grade 4 and 5 with Distinction,ABRSM Theory Grade1 and 2 with Distinction and Piano Grade 1 with Merit. He is currently working towards Grade 5 Theory, to enable him to continue with more advanced singing examinations.
Steffan has performed many solos at Bangor Cathedral, one of his favourite pieces is the 'Magnificat by Stanford in G' .He has sang a variety of well kno ... wn treble solos. During the 2014 ''Thousand Candles'' Christmas Concert he sang Mozart's Exsultate Jubilate Allelluia. He was awarded the Chancellor's scholarship for 2015/2016 in October 2015, this scholarship and medal is given for consistency and was presented to him in a special service by the Diocesan Chancellor in the presence of the Bishop of Bangor, however, Steffan decided to leave the Cathedral choir and has joined the robed choir of St Mary's Church in Conwy (famous for the ''we are seven'' grave).
His passion for singing became apparent when he was given the leading part in a school production of 'Cinderella'.
Steffan has had the opportunity to take part as a soloist at a number of concerts, namely a concert by Shan Cothi titled 'Paradwys' in November 2015 and a concert with Rhys Meirion called 'Tonic' in December 2015 and numerous concerts called 'Llwyfan Gerdd' held at the Galeri, Caernarfon between 20014 and 2016.
An invitation came by St Joseph Schola at St Joseph's Catholic Church, Pwllheli to sing at their Annual Christmas Service of Lessons and Carols. ﻿Steffan participated in the school musical titled 'Bancsi Bach'. He recently appeared on the television programme 'Dechrau Canu Dechrau Canmol' (The Welsh version of Songs of Praise) singing 'Ave Maria' by Bach /Gounod. He currently attends performance classes at Pontio in Bangor. Music theory and singing lessons at the Galeri in Caernarfon whilst piano lessons are a Saturday morning must. As it is the Eisteddfod season, Steffan will also be competing in various singing competitions in the locality.
Radio Cymru, the Welsh Language Radio interviewed Steffan and it was broadcasted on 26th April 2016.
Steffan was cast as Linda Brown's grandson in the recent fictional Welsh Lookalike Agency programme called 'Run Sbit' on S4C by Cwmni Da.He has recently been awarded (RSCM) Choral Silver Medal Award (Bishop's Award) with Distinction and Highly Commended.Please follow Steffan on his official Twitter Page : @steffllewelyn

Steffan has had the opportunity to take part in concerts alongside Shan Cothi and Rhys Meirion.