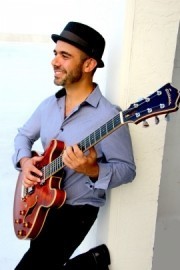 (no reviews)5.0
Country: United States
Based In: Brooklyn, New York
Performs: Worldwide
From: $8000

Greg Diamond is a Latin Jazz artist from New York City. His group has performed at The Blue Note, Iridium, Joe's Pub, and at numerous club and festivals abroad.
: 1347822XXXX Click here to reveal
full number

Critically acclaimed Brooklyn-based guitarist, composer, and bandleader Greg Diamond creates music inspired by Latin American sounds and rhythms which he seamlessly infuses into the context of modern New York-style jazz -- with modal harmonies, odd meters, and various other elements that comprise the city's vibrant and dynamic musical tapestry. All About Jazz hails Diamond, who is of mixed Colombian and Jewish-American origin, as “a rising star in the New York jazz scene..". Latin Jazz Network writes that Diamond is a “composer of great maturity and genius” and also featured his soph ... omore release “Conduit” (Dot Time) as an Editor’s Pick for “Best Albums of 2012”. Indeed, Diamond has cultivated a distinguishable sound, with his own his writing, a crack ensemble, and also for his use of the electric guitar, an instrument rarely utilized in the context of contemporary latin jazz. New York since the early 20th century has been known to the world as a cultural “melting pot" -- that trend still continues today in the music scene, and Diamond’s musical journey is a testament to that.
Greg and his group have been seen performing at numerous premier New York venues such as: The Blue Note, Iridium Jazz Club, Joe’s Pub, Smalls Jazz Club, Zinc Bar, and Nublu; not to mention numerous festival presentations, among them: The Madrid International Jazz Festival, Barranquijazz Festival, Jimmy Glass Jazz Festival, Teatro Libre Jazz Festival, Medejazz Festival, Jazz al Parque Festival, and the Nublu Jazz Festival. In 2007, he was a semi-finalist at The Gibson International Jazz Guitar Competition hosted by The Montreux Jazz Festival in Switzerland, where he performed before jazz guitar legend George Benson.
Diamond has shared the stage with luminaries the likes of Seamus Blake, Steve Turre, Hector Martignon, Antonio Hart, Jon Benitez, Henry Cole, Oscar Stagnaro, Stacy Dillard, Emilio Solla, Michael Philip Mossman, Don Friedman, Gretchen Parlato, Asha Puthli, and many others. 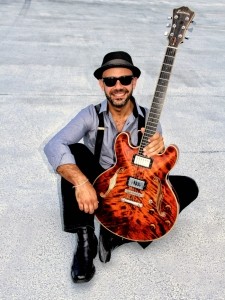 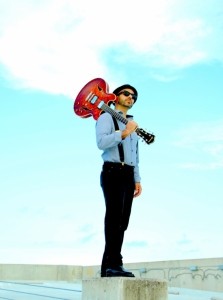