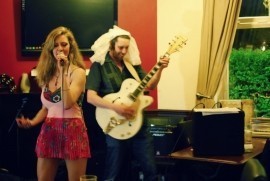 (no reviews)5.0
Country: United Kingdom
Based In: London
Performs: Worldwide
From: £300

Jessie Pie & The Thorn, is a vocals and guitar duo that also comes as a trio with drums. We describe ourselves as Americana - blending rock, blues, country, even reggae - depending on the mood, we also embody a strong element of cabaret and audience interaction. We play standards, covers, and a lot of original material, of a straight and comedic nature.

Jessie Pie & The Thorn, aka Jessie Pie and Chris Thorn, met one evening when they were both postering by a dazzling vegetable display at a grocery shop in Hornsey. They hooked up professionally via FaceBook and subsequently began working on Jessie's songs, much to the hyperventilation of local townsfolk.

Jessie hails from Yorkshire, and started singing over ten years ago, making her early forays on London’s cabaret and fetish scene with a catalogue of saucy covers and originals. She went on to front a wild blues band, teaming up with a highly talented transvestite guitarist and pianist/violinist, plus others, and a dazzling array of stilettos, which would litter the monitors at gigs. She loves blues, jazz, folk, country blues, as well as David Bowie, Freddie Mercury, and the bizarre, erotic creatures of rock. She also has an acoustic trio called The Pie Trio.
Chris has worked extensive ... ly in bands for the last twenty odd years, having learned the guitar when he was sixteen years old. He plays the Gretsch, a vintage model with an evocative, gnarly sound and a big whammy bar. He grew up in Hastings, where the band makes frequent visits to pick up the salty seaside air and excite deranged and sane residents alike. He recently lost a tooth and temporarily resembled a wicked pirate. Now that it is fixed, he resembles a sensible pirate, although his mum says he needs a haircut. He has two lovely children and a big red van.
JP & TT employ two drummers, in alternation.