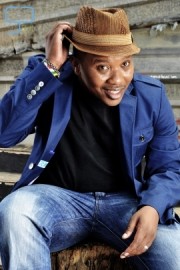 (no reviews)5.0
Country: South Africa
Based In: Johannesburg, Gauteng
Performs: Worldwide
From: R55 000

Max-Hoba is an audience engaging, interactive and versatile act on stage. His music awakens the human spirit with the messages world peace, harmony and unity, from reggae sounds to soulful melodies, from traditional African praise chants to American spiritual influences
Request a Quote
Share this Page:
Profile Views: 213
Report this profile

Johannesburg based Max-Hoba is a versatile AfroSoul and World music artist with vast experience on the performance stage. Performing mainly in English and his native Xhosa and Sesotho languages. He has wowed crowds in the Sub Saharan region of Africa to as far as Bangkok, Thailand and Cologne and Berlin Germany. In his career he has worked with the cream of the crop of South African musicians as a producer, songwriter, composer and featured artist.
Considered one of the best performers of his generation it is only befitting to share his talents with the rest of the world. Having never been s ... igned to a major record label and no sponsorships or funding, he has managed to shape his career to be one of the most reputable artists of his time always striving for something other than the norm. A dedicated family man and father of two, to him a positive message is always on the cards and the humanitarian in him makes it easy to get what he is about.
Currently Max-Hoba and his band The Chorus are working on completing his sophomore album "TravelingMan" due for release at the end of July in South Africa
MUSICIAN
Max-hoba has invaluable experience, great commanding stage presence. He has worked with SA’s most talented hip hop artist, HipHop Pantsula (HHP). They worked together on HHP’s Maftown Album, then Omang, Omang Reloaded, YBA to NW and Acceptance Speech.
Max-Hoba has over a decades experience as a singer, songwriter, dancer and producer.
He has worked with other highly acclaimed artists like Amu, Morafe, Mr Selwyn, H20, Flabba and Pebbles contributing creatively in their projects. One of his memorable highlights is performing alongside greats like Ringo Madlingozi`s at Macufe Main Jazz Festival 2010. He has also shared a stage with Paul Hanmer, Sipho “Hotstix” Mabuse, Don Laka and many others.
?MC & Brand Ambassador
He represented SA at the Africa Is Calling tour of Germany at the World Cup 2006, promoting SA as the place to be in 2010. Max-hoba was chosen as the Sole opening act for the Wailers during their One Night only performance at the Blues Room. He was also commissioned by Absa Bank Limited as a Digital Channels Brand Ambassador and was also tasked with teaching high school learners music writing and performing skills for the Clash of The Techies project.
Booked for this year's International festivals, the Standard Bank Joy of Jazz and Macufe in September and October 2014 respectively.