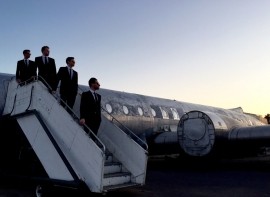 The Mersey Boys UK do not only celebrate the greatest singers, bands and musicians to have come out of Liverpool over the past 70 years: The Beatles, Gerry and The Pacemakers, Elvis Costello, Cilla Black, Billy Fury... but they also pay tribute to the magic of Motown!
: 0741562XXXX Click here to reveal
full number

When contacting this member, please state that you are viewing their Entertainers Worldwide profile.
Request a Quote
Share this Page:
Profile Views: 778
Report this profile

The Mersey Boys are a close harmony group from Liverpool, who celebrate some of the greatest singers, bands and musicians to have come out of Liverpool over the past 70 years: The Beatles, Gerry and The Pacemakers, Elvis Costello, Cilla Black, The Zutons, Billy Fury to name but a few... They also pay tribute to the music of Frankie Valli & The Four Seasons and the smooth sounds of Motown.
As well as around Merseyside, you can find The Boys performing on-board - Holland America Line, Norwegian Cruise Line, Celebrity Cruises & P&O Cruises as headline guest entertainers.
Other clien ... ts include: Age UK Wirral, Liverpool Football Club, Liverpool Echo Newspaper - Pride of Merseyside Awards, Hillsborough Family Support Group, Greene King, Olivia Alice Foundation, Adelphi Hotel, Alder Hey Children’s Hospital, Signature Living, and The Green Room.
​ 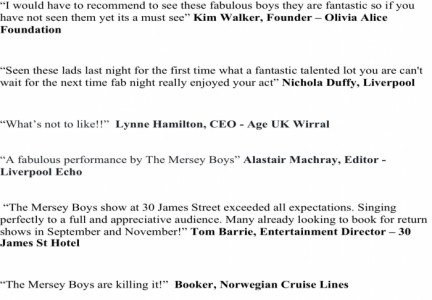 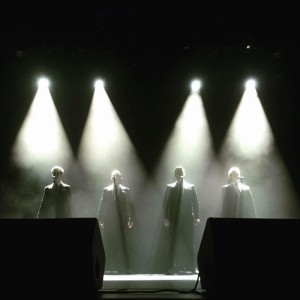