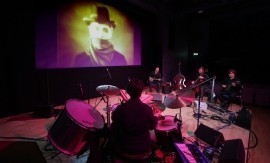 Minimaʼs music is a 21st-Century interpretation of the images of silent film. Formed in 2006, Minima perform in cinemas and art centres, as well as music and film festivals, playing original live soundtracks to silent films.
“Minima are one of the leading bands accompanying silent film in Europe.” (Robert Rider, Head of Cinema, Barbican Centre, London)
Our repertoire includes set scores to classic silents including the 1925 Phantom of the Opera featuring Lon Chaney, Alfred Hitchcock’s The Lodger and German horror films Nosferatu and The Cabinet of Dr. Caligari.
“Minima’s unmistak ... ably spine-tingling music clung to each twist of the movie… spellbinding accompaniment.” (The Guardian)
“Acclaimed soundscapers Minima provide a superlative soundtrack.” (Time Out London)
Minima are a Bristol-based four-piece group, with instrumentation including cello, double bass, baritone guitar, acoustic and electric guitars, mandolin, autoharp, dulcimer, synthesizer, glockenspiel and drum kit. We have written for contemporary filmmakers and also offer masterclasses in silent film accompaniment.
“A superbly sinister live score by the soundtrack group Minima.” (Financial Times)
Highlights over the years have included performances at the Glastonbury Festival, the Barbican Centre, BFI Southbank and the Transylvania International Film Festival. We are primarily a live performance group but we have recorded music for short films by contemporary filmmakers and we are always interested in commissions – for silent films or for new soundtrack recordings.
“One of the spring’s coolest events… Minima capture the film’s disturbing mood perfectly.” (Daily Telegraph)
“The atmosphere was absolutely magical… hundreds of people seemed utterly spellbound.” (East End Film Festival 2012)

The Phantom of the Opera
The Lodger (Alfred Hitchcock)
Nosferatu
The Cabinet of Dr. Caligari

Established in 2006. The group exists only to accompany silent films. We are recognised experts in the field.
We have played all sorts of venues including cinemas, churches, the Barbican Centre, a castle in Transylvania, outdoor events, the British Film Institute, but also village halls and community events.
We attract the very young through to the very old, film enthusiasts as well as those interested in music. Our sound is unique, theatrical, with no pre-recorded sounds or effects. A vintage film and a very live show!

The show is equally visual and musical. It does require a venue suitable for blackout, or near-dark. We bring and engineer all sound equipment and can provide projector if necessary. Our PA system is state-of-the-art. Audiences are surprised at the "immersiveness" of the experience.