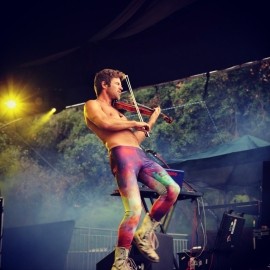 When contacting this member, please state that you are viewing their Entertainers Worldwide profile.
Request a Quote
Share this Page:
Profile Views: 524
Report this profile

Tropo - World House Fusion
Tropo is all original world vibe electronic party music. The act plays solo (like a DJ) with live violin or as a full trio with live drums. The music is deep and moody and it takes you around the world from Asia and Eastern Europe to Latin America and beyond evoking visions of nomadic caravans and tropical gypsies.

Tropo - World House Fusion
Californian producer Tyson Leonard composes compelling and hypnotic dance music, a mix of electronics with his violin and mandolin. His live sets take you through a world of house fusion and downtempo woven by classical, Gypsy, Middle Eastern, Latin, and bluesy roots threads.
Though Tyson often appears as a solo performer, the Tropo trio, Adam Kapuscinski (drums and percussion) and Grant Leonard (bass and keys), pushes the energetic and collaborative experience higher coaxing the audience into a synergistic trance.
In 2016 Tropo appeared at Lucidity, Big Su ... rreal, Burning Man, Symbiosis, Earth Jam and toured the Yucatan Peninsula in Mexico, and released their album “Blue Mountain.” Tyson also co-produced with Ryan Herr Wildlight “The Tide (Acoustic)”, and Ayla Nero’s acclaimed new release “The Code Of The Flowers.” With bigger aspirations for 2017, Tyson continues to prolifically compose new positive music with intentions of creating a fun yet meaningful experience.