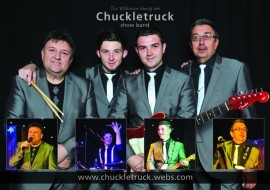 Chuckletruck are a family comedy show band who perform all over the UK. Performing a comedy set and/or a music set featuring great songs from across the decades. Chuckletruck are accurately described as a variety act and a very good one at that!
: 0787722XXXX Click here to reveal
full number