You are contacting Comedy of Mike & Sue 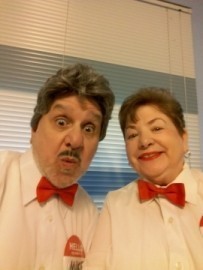 They are a specialty entertainment duo that will enter at your function & interact with your guests, as anyone you want them to be. Followed by comedy routines, audience participation, funny roast, music & much more!!! * All Occasions
Request a Quote
Share this Page:
Profile Views: 598
Need Help?
✖