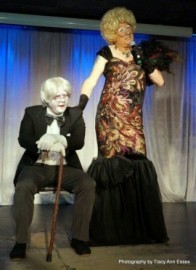 (no reviews)5.0
Country: United Kingdom
Based In: Kent, London
Performs: Worldwide
From: Contact

Dame Lucy Bun & Reg is the ultimate comedy show. With a unique take on married life, the show will take you on a whirlwind night of fun and laughter.
Lucy Bun, whose face could curdle milk at 50 paces, entertains an audience with hilarious stories of life with her downtrodden husband. Reg, who defies death with every breath, may look like he sits on the sidelines while Lucy takes the laughs, but will he be the one who ends up stealing the show?
Dame Lucy Bun and Reg is an award winning comedy show that has been performing around the world and entertaining audiences for over 20 years. The ... show has a strong following of fans and has built up a very good reputation in its field.
The act is based around old married couple Lucy and Reg Bun, who will take you back to the days of Music Hall with a show that caters to all generations.
The show has many formats and can be adapted to any venue and any audience.
The main format of the show is 45 minutes to an hour of comedy and singing that can be split into separate performances, depending on the requirements of the client.
The show is adaptable to suit all audiences, by using "over-the-head" delivery for audiences that include children, to a more racy strictly over-18s act.

Since their conception Dame Lucy Bun and Reg have established themselves, both in the UK and abroad,
as one of the most original and refreshingly different comedy acts on the entertainment scene. Having worked in every field from TV and radio to theatre and cabaret, they are considered one of today’s leading comedy talents.
These triple award winning characters' quirky slant on married life with their particular brand of saucy cheeky charm and “over the head” delivery is proving to be of great appeal right across the age spectrum and is providing them with an ever growing army of fan ... s.
Over in Benidorm, the Costa Blanca's entertainment mecca, they are billed and respected as one of the comedy scenes biggest attractions. On a recent visit to the town, reviewers for the "Clubman's Guide" wrote "...but the act that is packing them in every night is Dame Lucy Bun and Reg, and they are hilarious! Watch out for these two - they are going to be household names!"
SIMON YOUNG as DAME LUCY
Since the age of 16 when he starred in his first film, Simon has stopped at nothing to entertain. Having worked in every field of the business - film, TV, radio and his first love, theatre, he is now respected as one of the country's leading character actors. He has even entertained his public by wrestling a fully grown, full-blooded lion. Big cats are his life long passion and to this day he is still involved in their protection and conservation
Simon has also achieved marked success as a comedy performer. A multi award winning comedian, he now divides his time between the UK and Spain, where he is now regarded as one of the biggest attractions on the Costa Blanca.
Simon is currently working on a new writing project which he is very excited about.
EDDIE BUSHELL as REG
Eddie has been entertaining professionally since 2000. His first job was at Mundesley Holiday Village as part of the entertainment team. He progressed to assistant entertainment manager and, in 2012, took over the reigns as band leader and musical director, in charge of the evening's dance programme and producing & directing the in-house variety shows.
In 2005, he auditioned for Thomson Gold as a host but was picked up by Openwide International to represent their production team for Thomson's Falésia Hotel in the Algarve. Three summers as lead male vocalist followed, as well as one winter season employed directly by the hotel as their resident pianist and host.
Eddie's association with Openwide afforded him the opportunity to embark on another journey of performance, this time as a member of the very first cast of the Christmas version of Cromer Pier's iconic Seaside Special. He has returned to the role again and again, racking up appearances in six Christmas Pier Shows so far.
In addition to numerous private functions, weddings and parties as a vocalist and keyboard player, Eddie sings with The Acafellas, a six-piece male vocal harmony and beatbox group who are currently very busy on the wedding and corporate events scene.
This year, Eddie is incredibly pleased to announce he will be appearing in the famous Thursford Christmas Spectacular, the largest show anywhere in the UK outside of London's West End.
With the closure of his beloved Mundesley Holiday Village just before Christmas 2014, Eddie began to look for alternative employment and that's when he contacted Simon regarding playing the part of Reg. The rest, as they say, is history, and after a successful two-month run at the Talk of the Coast nightclub in Benidorm, the duo returned to the UK to continue the act at private functions and holiday parks up and down the country.
Eddie is thoroughly enjoying the challenge that the character of Reg brings and is very pleased to be working with Simon, having known the act as a visiting cabaret years previously.