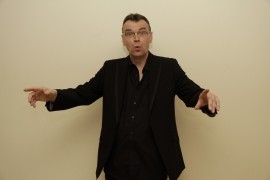 (no reviews)5.0
Country: United Kingdom
Based In: Birmingham, West Midlands
Performs: Within 50 Miles
From: Please enquire

When contacting this member, please state that you are viewing their Entertainers Worldwide profile.
Request a Quote
Share this Page:
Profile Views: 1310
Report this profile

A brilliant loyal and affectionate act, full of humour and music. Five star reviews received at the Edinburgh 2015 Festival for David's portrayal of Noel Coward. An hour of classic old style variety with glimpses of all your favourite entertainers and variety legends. A flexible and varied bill of entertainers brought to you by one man. All ages will love it and join in with the fun with ease.

David is a professionally trained actor with over twenty five years experience as a performer. He has toured nationally and internationally, playing such varied characters as CS Lewis, Woodbine Willie, and Noel Coward. He has appeared in numerous films and has appeared on the BBC. He is also an accomplished playwright and has his own successful one man show.

David has long experience as a compere and linking shows and events, and has experience with a well received stand up routine.