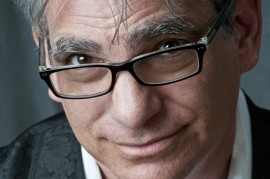 When contacting this member, please state that you are viewing their Entertainers Worldwide profile.
Request a Quote
Share this Page:
Profile Views: 682
Report this profile

Humorist/Story-Teller Dylan Brody provides full-length stand-up style entertainment in the tradition of the great raconteurs. Weaving personal narratives that seem wholly factual (none of them are) seamlessly with stories that must surely be entirely made-up (none of them are), Brody draws audiences into a gales of laughter and long, listening silences with tales that always entertain, often enlighten and strive to elevate.
David Sedaris says. "He's funny in ways that don't remind me of anyone."'
Richard Lewis says, "The twists of Brody's psyche are cathartic for him and a thrilling for his ... audience."
Robin Williams said, "The writing is brilliant."

With fans that include comedic legends such as Carl Reiner, Robin Williams, Roseanne Barr and Richard Lewis, and an ever-expanding repertoire of witty and profound tales of his journey through life that are unique, yet utterly recognizable to everyone, Dylan has earned a reputation as one of America’s fastest rising storytellers. '
Dylan’s newest full-length, award-winning, stand up-style story-telling special, Dylan Brody’s Driving Hollywood has been licensed by NextUpComedy for 2017 release. Blue Panther Productions contracted with Mr. Brody to work with director Nancy Carlin to de ... velop the show as a fully realized, theatrically staged solo show to tour internationally in the Spring of 2017. Earlier specials included More Arts/Less Martial, available as a five dollar download from Rooftop Comedy and The Wereshmuck: Transformations of a Moron for the now defunct Anteye.com.
For three years running best-selling author and humorist David Sedaris invited Mr. Brody to share his stages when touring the West Coast.
Mr. Brody has performed regularly for the David Feldman show on KPFK(Pacifica Radio) in Los Angeles., The Drive with Steve Jaxon on KSRO (Sonoma County) and is a regular contributor to John Rabe’s OFF RAMP on KPCC, NPR's Pasadena affiliate. His material runs on XM/Sirius Satellite Radio’s comedy channels, Pandora and he contributes to the Huffington Post and Daily Kos. He has written for dozens of comedians, including Jay Leno, who has used Brody’s work in his monologues on NBC’s The Tonight Show and recently placed a story in the burgeoning magazine of American humor, The American Bystander.
In 2005, Dylan won the Stanley Drama award for playwriting. He is a thrice-published author of fiction for the Young Adult market with one of his books, A Tale of a Hero and The Song of Her Sword finding a place in the curriculum at several public schools in the U.S., earning him a yearly influx of poorly written fan letters and e-mails to which Mr. Brody diligently replies. His recent one-woman play, Singing in the Wrong Direction played to sold out crowds in the NoHo arts district late in 2016.
He has appeared on A&E’s Comedy on the Road, FOX TV’s Comedy Express, and Showtime's The Green Room with Paul Provenza. In 2010, Dylan appeared in the George Carlin Tribute at the New York Public Library, hosted by Whoopi Goldberg, featuring Anne Meara and Jerry Stiller, Ben Stiller, Kevin Smith, Louis C.K., and publisher Lewis Lapham, among others.
In early 2007, Dylan Brody's Thinking Allowed, brought long form humor and insight, literate and literary, to a broad based audience. The first all story-telling program ever in the venue, the show enjoyed a successful six month run on the main stage at the Hollywood Improv.
The Stand Up! Records label released Brody’s first five CDs between 2009 and 2012. In 2014 Rooftop Comedy produced and an overlong digital-only album, Dylan Goes Electric.
In his years as a club comic, Dylan worked in venues fall over the world, sharing the stage with some of the comedy world’s biggest stars including: Adam Sandler, Dennis Miller, Jon Lovitz, Larry Miller, Norm McDonald, Louie Anderson, Richard Belzer, Larry David, and Jerry Seinfeld. In those days, George Carlin once told him he was “a very funny, young political comic.” He has appeared at M.I.T., at Sarah Lawrence College’s vast Reisinger Concert Hall and served as Northfield Mount Hermon School’s first ever Artist in Residence. 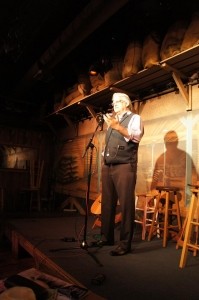 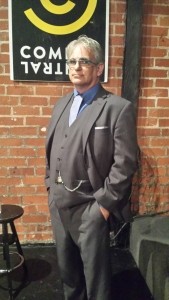 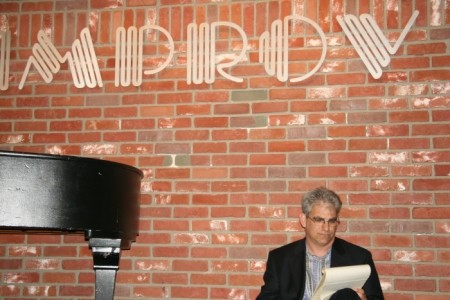 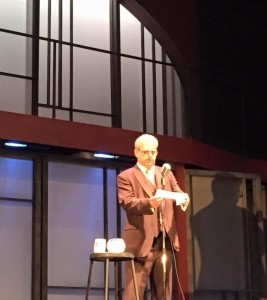 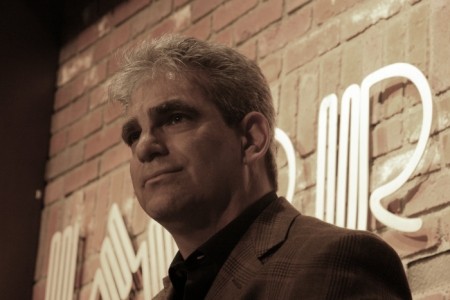 Dylan Brody - Other Comedy Act - Los Angeles, California Event Location: San Francisco Event Type: Club Appearance 9th April 2011
Comedian turned storyteller Dylan Brody’s entire persona seems transported from a calmer, more measured period. He doesn’t go for the shock-and-awe approach of so many stand-up comics, nor does he cultivate an affected, deliberately weird persona like the denizens of alt-comedy circles. What he does only vaguely resembles stand-up at this point, even if he still plays comedy rooms. With his rumpled, hangdog delivery; restrained demeanor; and incisive wit, the playwright, novelist, and performer is often compared to monologist Spalding Gray. Brody’s stories mine humor and pathos from even the most mundane transactions, with a sensibility that is humane and dryly absurd. Within a single routine, he can veer from autobiography into satirical flights of fancy before returning to the personal. There’s an undercurrent of political outrage to Brody’s stories — he moonlights as a Huffington Post blogger, which should give a hint as to his political sympathies — but he doesn’t u ...se the stage as a soapbox. With calm remove, he cuts through the bullshit and reveals the very human motivations behind the challenges of daily life, whether the antagonist happens to be the world’s dumbest (and most polite) mugger, meddling agents and Hollywood suits, or society at large.
Reviewed by: Paul Davis (SF Weekly)
Dylan Brody - Other Comedy Act - Los Angeles, California Event Location: Skidmore College, Saratoga Springs, NY Event Type: College Appearance
Martial artist Bruce Lee once said: "Forget about winning and losing; forget about pride and pain .. .Do not be concerned with escaping safely -lay your life before [your opponent]." Comedian Dylan Brody gave Lee's words new meaning in September as he presented his solo piece, the aptly titled More ArtslLess Martial, tak¬ing audience members on a journey filled with personal and profoundly funny moments. Dylan Brody, whose father, Alan Brody, was once Chair of the Skidmore Theater Department, has come a long way. After studying at Sarah Lawrence College and the Royal Academy of Dramatic Arts in London, he began his career as a stand-up comedian in New York. He eventually made his way to LA where he continued working and studying. Although he fell on hard times, his hard work and perseverance paid off. In addition to his stand-up, Brody has released three CDs and three books. In 2010, Brody appeared in the George Carlin Tribute at the New York Public Library, along with comedians Who ...opi Goldberg and Ben Stiller. The night after his Skidmore performance, Brody performed another show, Purveyor of Fine Words and Phrases, at Caffe Lena. The show he performed at Skidmore, More ArtslLess Mar¬tial, debuted in 2009 and is currently touring. Brody began his one-man show by telling the audi¬ence the story of how, as a baby, he was rushed to the hospital with a high fever. When he rerumed home, his mother wanted to make sure he was all right, so she said, "Hooray for Dylan," hoping for his usual clap in response. When Brody clapped, all his worried family applauded - a noise which has inspired Brody ever since. He shared sev¬eral memories, some pain¬ful, some uplifting, and all enlightening. The stories ranged from his embar¬rassing childhood experi¬ence with Little League, to his struggle to make it as a stand-up comedian in LA, to a close encounter with the Bloods, and a battle over superiority with his cat (Jolo Precious Tiger Kitty). Though there was fantastical humor in his tales, Brody's down-to¬ earth nature, as well as the truly human struggles imparted in these tales, made something as ini¬tially silly as a wrestling match with a cat a mo¬ment of complexity and introspection. As suggested by the title, the crux of the piece focused on how Brody found a therapeutic outlet through martial arts. As he trained, Brody overcame many problems and gained the confi¬dence, self-esteem, and maturity that enabled him to rise to the rank of Master. Indeed, many of his best stories in¬volved his time studying and teaching at the martial arts studio, including how he nonviolently diffused a situa¬tion with two boys. The boys had been hanging around the studio all day trying to pick a fight with instructors. Instead of using physical violence, Brody demonstrated the kiai, or battle cry, for them. Brody's ability to stand his ground, share an impressive skill, and avoid physical conflict, instilled the young men with a sense of respect for him and his work. They returned to the studio the next day, this time as students. Not only was this a great story, but it also allowed the audience a glimpse into the type of focus needed to practice such a craft and to see its universal appeal. As the show drew to a close, Brody shared a medita¬tion that he does at the end of every class. While he fol¬lows the same teaching curriculum as other instructors, he has invented this unique trademark. "Listen to the sound of your breathing; that sound has been with you from the moment you were born, and it will be with you until the moment you die," Brody said. With a combi¬nation of humorous anecdotes, astounding humbleness, and a mastery of and appreciation for his many crafts, Dylan Brody is truly a storyteller for the ages.
Reviewed by: Lizzy Andretta